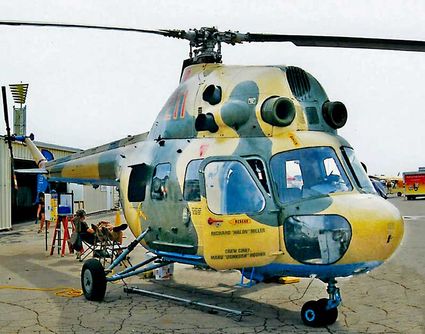 Dr. Mikhail Leontyvich Mil (1909-1970) began his career working on autogiros with another noted Russian rotary wing pioneer, Nikolai Ilyich Kamov (1902-1973). During WWII, Mil was assigned to a Red Air Force autogiro unit. In 1947, he formed his own design bureau to pursue rotary wing research. His first helicopter, the Mi-1 "Hare" with an Ivchenko piston engine was completed in September 1948 and was produced for Aeroflot and the Soviet Air Force for passengers, crop spraying, and med evac.

The turboshaft powered Mi-2 "Hoplite" first flew on 22 September 1961 in the USSR as a light utility helicopter for military and civilian duty. In January 1964, further development and production was transferred to Poland with PZL. The first flight of the Polish produced Mi-2 occurred on 4 November 1965. In all, over 5400 were built between 1965 and 1998, serving with over 30 nations, including the United States. Powered by two 400 hp turboshafts, the Mi-2 can carry up to eight passengers or 1500 pounds of freight at 124 mph over 270 miles. Armament can include 23 mm cannon and 57 mm rockets for ground attack. Other duties have included anti-tank, air ambulance, ship deployment, search and rescue, crop spraying, and troop transport operations.

Mil continues to design and build helicopters for civilian and military duties. These have included the Mi-6 "Hook," one of the world's largest helicopters with a rotor diameter of 114 feet 10 inches and the Mi-24 "Hind," a versatile and heavily armed attack/assault platform.

This photo from Oshkosh 2015 shows a PZL built Mi-2. A former Polish military bird, produced in December 1976, it served with the 44th Helicopter Regiment and later the 24th Helicopter Base. It was withdrawn from use in Poland in 2002 and came to the United States with Florida Specialty Vehicles. Today it is registered to the State of Iowa as N211PZ.

June's winner is Jennifer Cichy of Webster, Minnesota, who knew it was based with the University of Iowa. Others who correctly identified the "Hoplite" were Michael Johnson, Suzanne Tschida, Bob Eckstein, Dave Lundgren, and Joe Connell.