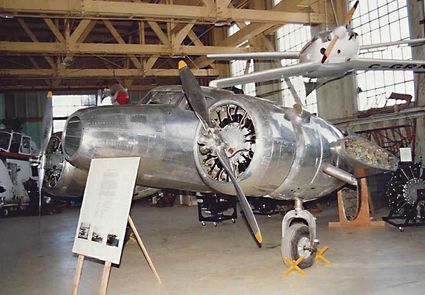 Archibald Barkley began his career working with the Wright brothers and with pioneering companies Verville, Stout, Ford, and Curtiss. Teaming up with Harold Grow in 1936, they established the Barkley-Grow Aviation Corporation in Detroit. Their main product, with its patented multi-spar all metal wing, was the T8P-1, a twin engine, twin tailed airliner, which first flew in April 1937 piloted by Frank Cordova. Test flying was done by noted air racing pilot Lee Gehlbach. The T8P-1 was awarded Approved Type Certificate ATC 662 on 30 October 1937.

Often mistaken for a Lockheed 10 or Beech 18, the T8P-1 had two 400 hp P & W Wasp Juniors and was capable of 225 mph at 5000 feet in spite of having fixed landing gear. Lack of a retraction system proved a blessing, as most Barkley-Grows operated in Canada on Edo floats or snow skies. When fitted with twin floats a third dorsal fin was added between the oval tails. Rugged and with a good load carrying ability, the T8P-1 had a gross weight of 9200 pounds as a float plane.

Admiral Richard Byrd used NC18470 (c/n 7) "Explorer" on his third Antarctic Expedition between 1939 and 1941. RCAF No. 12 Squadron operated c/n 5. Six were used by Canadian Pacific Airlines from before WWII until replaced by DC-3's in 1949. Grant McConachie, the "Bush Pilot with the Briefcase", was a key operator of the Barkley-Grow. Although successful as a bush plane, only nine were completed, and Barkley-Grow was absorbed by Vultee in June 1940. A few T8P-1's continued flying until 1970.

I photographed CF-BQM (c/n 8) at Calgary in August 1989 while restoration was underway. It had served with Mackenzie Air Service, Canadian Pacific Air Lines, Northland Airlines, and other operators until it sank at its moorings in late 1970. Still abandoned in 1977, it was rescued by the Aero Space Museum at Calgary and is now displayed, fully restored. Two other examples are displayed in the Reynolds-Alberta Museum in Wetaskiwin and the Alberta Aviation Museum in Edmonton.

Blue skies and tail winds to all.

Only Dave Lundgren of Rosemount knew the Barkley-Grow. It seems there still are some mysteries out there!