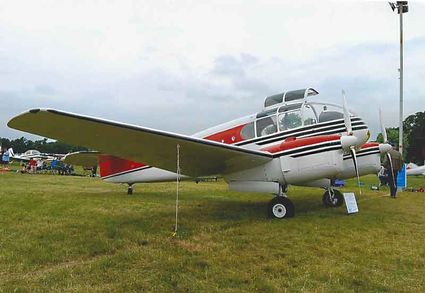 The Czech Aero company got its start in 1919 manufacturing the Austria- Hungarian designed twin gun Phoenix fighter under license. Later, it produced its own designs for civil transports, fight- ers, and bombers. After World War II, the reformed Aero began production of a family of light transports, beginning with the Aero 45 of 1947.

Total production was around 590

(some sources say 700), with many going to the Soviet airline Aeroflot for use as air taxis and ambulances. Exports also went to East Germany, Hungary, Italy, Switzerland, and China. China's Kharbin Engineering Works built a stepped cock- pit copy beginning in 1958, called the Sungari. Of all metal construction, the Aero 45 is capable of 168 mph, with an economical cruise of 112 mph. Its name, "45" comes from its ability to carry 4 to 5 people.

France (F-BKGY), before landing in Great Britain in 1964 as G-ASYY. Exported to the United States in 1978, this 105 hp Walter Minor 4-III powered 45S was idle from 1996 until 2010 when it was rebuilt by William Shepard. Registered N145SA in the experimental category, it is listed on the USCAR as based in River Ridge, Louisiana. This photo was taken at Oshkosh last year.

This month's winner is Graydon Carlson of Inver Grove who is often "on the road".