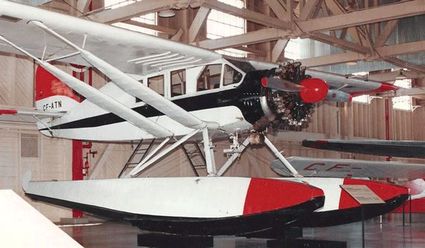 Known for its reliability, range, and cargo capacity, the Bellanca Pacemaker won the hearts of bush pilots and record setters.

As an example, Russell Boardman and John Polando flew from Floyd Bennett Field to Istanbul in a Pacemaker called "Cape Cod" nonstop, a distance of 5,011 miles in 49 hours and 20 minutes between 28 and 30 July 1931.

In the far north, Bellancas hauled fish, were used for aerial mapping, and mounted on floats and skies, provided mail service to remote Canadian and Alaskan settlements. Nicknamed the "bow legged Bellanca," it had excellent short field performance.Powered by a 300 hp Wright Whirlwind radial engine, the CH-300 had a maximum speed of 140 mph, a normal range of over 600 miles, and a useful load of over 1,700 pounds. The floatplane version sold from the factory for $17,400.

The Ch-300 in this photo, taken in June 1985 in Ottawa, is serial number 181, which was delivered to El Paso Air Service in 1929 as NC196N. After service in Texas and Mexico, it migrated to Alaska in 1936, where it served with Marine Airways, later Alaska Coastal Airlines, flying mail, people, and cargo from Juneau until May 1964. By 1945, it had been re-engined with a Pratt & Whitney radial. In 1965 it was purchased for the Canada Aviation and Space Museum and repainted to represent CF-ATN, a Pacemaker that crashed in June 1938 near Flin Flon, Manitoba.