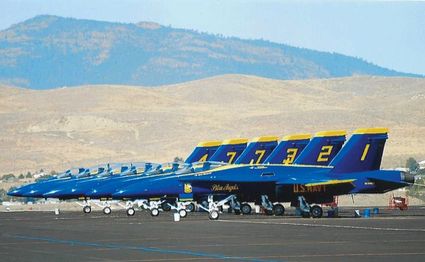 The Blue Angels were the airshow stars. They were accompanied by a C – 130T support aircraft.

The full moon was the only light on the gray gravel of lot 3-the Participants and Media lot. Race crews filtered slowly out of the banquet hangar, last good byes, hugs, slaps on the back, jokes, and joshes delivered, and wended their tired, sunburned ways toward rental cars, dusty pickups, and RV'S. Sawbones team would be taking many ways home-airliner, truck, and race plane.

Sue and I trudged toward the gate, past Formula 1 racers being disassembled for trucking home. Wings and props removed, some in steel skeleton like jigs, others shrink-wrapped, all sadly silent after a week of intense racing and camaraderie.

"Next year, man!" Matt shouted at me. I turned and Matt waved as he went to find his car. We'd worked on aircraft together when he was in Minnesota and reconnected at the races where he crews on a Pitts named Ruby. He's one of the few people I've met who knows about the Napier Heston Racer that might have reached at 480 mph if the bugs had been worked out of its 2350 hp 24 cylinder Sabre engine.

As we slipped through the gate in the chain link fence Sue asked, "Where's the Mazda?" Half empty, Lot 3 was still a puzzle of waiting, brooding vehicles, only practical, not the focus of the week, bit players to the airplanes who are the stars of the world's fastest motor sport.

"All right little white car, where are you?" I mumbled. Finally, Mr. Low Tech pulled the remote out of his pocket and lit up the hiding car. I was standing in front of it.

Air racing engenders an amazing sense of family. It starts when you get there. We set up the pit, get the racer inspected, and connect with race officials to get the necessary permits, papers, and participant wristbands.

Tony and Wayne (our rookie driver) had navigated I-35 and I-80 through wheat fields, up mountains, across salt flats, and through scrubland to Reno-Stead. When Sue and I arrived on Saturday afternoon, Brent was already setting up what he calls the "nerdy stuff" and Doug was working on the carburetor that had been sent over night to Reno, the shippers promising it at Anoka in time, failing, and shipping it on their nickel to the races. Each crewmember has specific duties for set up and operations. We also connect with our supporters.

Chris Holder is our Concorde battery rep. Concorde donated a Platinum battery for Sawbones, a connection that benefits both parties. The racer gets a great battery and Concorde gets more name recognition and visibility. Chris joined us Friday evening in the pit for our sponsor dinner. Over 60 people, all connected by racing, hosted by Dr. Crandall and race pilot Curt Brown. It was a mild Nevada evening with a marvelous desert sunset. A perfect setting to enhance camaraderie.

While other race classes were stable or up, this year's Ultimate Category was small - only 11 racers, four Sea Furies, two Yaks, the remainder Mustangs. Our friends from the California Wing of the CAF filled our front row with their Hellcat, Bearcat, and a Griffin engine Spitfire XIV. The top four qualifiers were Voodoo at 475.318 mph, Czech Mate at 444.121 mph, Dreadnaught at 440.432 mph, and Sawbones at 421.318 mph.

On the first Sunday of race week, while qualifications were still going on, three air tankers used Stead as a base to attack a fire near Susanville, CA. An old Lockheed Neptune with a pair of R-3350's, like Sawbones uses, was joined by two Cal Fire Turbo Trackers. Three retired Forestry Service fire fighters stopped at Sawbones' pit during race week. These guys had flown during the days of the B-17, Privateer, and PBY tankers, as well as the old Neptune. Amazingly, on the leg home from Reno to Phoenix, to my right was an aeronautical engineer and race fan who had helped design the Marsh turbo prop conversion of the old Cyclone engined Trackers. John was heading home to Savanna and his job with Gulfstream. We talked Meredith Effect and wing vortexes until we landed in Phoenix. Another connection!

Speaking of vortexes, Sawbones has wing tip smoke generators. During airshows, Curt and Robin demonstrate the tornadoes of wind that come off airplane wingtips. These generators are produced by Sanders – whose team brings three Sea Furies to Reno – the powerful Dreadnaught (the "Buick") with its 28 cylinder R-4360, the R-2800 powered Argonaut, and, as the British would say, the correct Bristol Centaurus powered "924" with its five bladed prop. I listened carefully one morning as Dennis Sanders conducted "class" about how the smoke winders were developed, their use by NASA, and sales to air forces all over the world. When I announce airshows with Sawbones, I remind audiences to look behind the aircraft not at it, so they can see the twirling streams of smoke. Just before we arrived in Reno two people in a Bonanza were killed when they got caught in the wake turbulence of a FedEx freighter coming into Reno-Tahoe. You can't see these vortexes – and yes, they can and do kill.

From back home John Bormus, a member of T – 6 Thunder and Hanger 9 FBO operator, joined us. He was a Reno first timer and Sawbones sponsor. Our thanks to John. T – 28 driver and airshow performer Chuck Cook was in attendance, as was Jim Harker who helped me navigate my first Reno in 2009 by explaining how things worked, who was who, and what was what. Jim has connections.

Barry and Denise Knotts of Toledo have been Sawbones' sponsors for a number of years. Their Lancair won a Homebuilt award at Oshkosh this year. Sue and I met them at an AirVenture ice cream stand this year, too. They are great members of our Sawbones family.

Family and Fox Hollow denizens, sponsor guests, and dignitaries – our pit was filled with enthusiastic race fans, some first timers, others old hands.

With only 11 Unlimited aircraft, the top four finishers were rather predictable, but in the silver heats, John "Dusty" Dowd, a crop duster from Syracuse, Kansas, shined. His Yak – 11, once based with Planes of Flame at Flying Cloud, qualified at 362.723 mph, but won the Silver trophy on Sunday at 376.174. Last year, he had difficulties qualifying. A great improvement. Early in the week I talked to John about his crop duster connections. When I announced the Salute to Beck at Battle Lake the week before Reno, we saluted Gerry Beck, a fellow duster pilot. I passed Cindy Beck's good wishes on to Dusty.

This year the races had a new sponsor. When the finalists were announced in each class, it was no longer a fancy watch they got as a gift, but since the new sponsor was STIHL, you guessed it – a chain saw. Two of STIHL's reps stopped at Sawbones' pit on Saturday, and I tried to pry from them what the gift might be – chain saw, weed wacker – they just laughed and said, "We'll let it be a surprise." 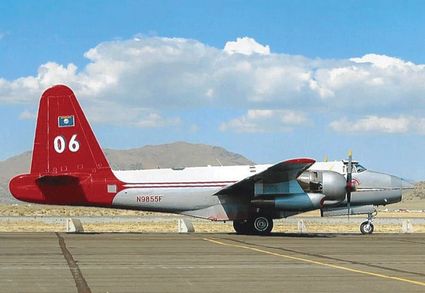 Early in the week three fire bombers operated from Reno–Stead attacking a fire near Susanville, CA. Tanker #06 is a Lockheed P2V Neptune, a contract aircraft from Montana. Note the red stains under the fuselage from the fire retardant.

Steven Hinton ran a tight, concise line in Voodoo and won Sunday's Gold at 460.306 mph. He established positioncoming down the chute and no one could catch him. Newcomer James Consalvi flew Czech Mate to second place at 450.582 mph. He was followed by Brian Sanders in the ever consistent Dreadnaught. Curt, and Sawbones, too, 4th with a 417.071 mph.

On a very rainy Wednesday afternoon, Tony and Wayne, horn blaring, brought the semi home to Fox Hollow. They were met by the crew, sponsors, and spectators. Everyone helped unload, stashing spare parts, left over merchandise, coolers, chairs, aircraft jacks, tool boxes, what have you, in their proper hangars. Crew and guest luggage – over a week of dirty clothes – was unloaded and lugged to waiting, dripping cars, pickups, and SUV's.

All the work done, we settled down around the table in Doug's hangar for a meal of Don's baked chicken, the best mashed potatoes and gravy anywhere, and for those inclined, cream pies. It was time for stories, pictures taken from the airliner window, and videos of the desert dustups and highlights at Stead Field. Let it rain. Sawbones and crew were home.