Oshkosh - It's all about timing 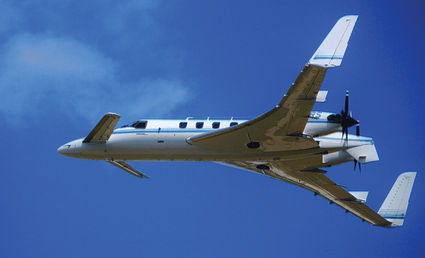 As part of the tribute to Burt Rutan, a Beechcraft Starship appeared. Although the first production aircraft few on 25 April 1989, it still looks sleek and futuristic.

We'd just pulled into the parking lot at the hotel in Ripon where we've stayed for the last 25 years when Sue pointed up and asked, "What's that?" The "What" was Golden Wings' Fairchild FC-2W2 flown by Jim Obowa, just making the turn over Ripon to follow the railroad tracks toward Fisk and Oshkosh. Timing. It's all about timing. Whether it's the convergence of the stars or planets or just plain dumb luck, timing. Something that brings together the old and the new, history and the future, the retro and the new technology. Old and new friends. Where else? Oshkosh.

In 1909 Count Ferdinand von Zeppelin founded DELAG or Deutsche Luftschiffahrts AG, regarded today as the first commercial airline. One of his airships, Schwaben, carried over 1500 passengers on 218 flights by the middle of 1912. Decorating the mostly clear Oshkosh sky this year was Goodyear's Wingfoot One, built by ZLT Zeppelin Luftschifftechnik, not a blimp, but a semi-rigid airship heralding a new era in lighter than air operations. Faster and more maneuverable than the earlier blimps, Wingfoot One can hover in place and is the first of three new semi-rigids that Goodyear will operate in North America.

In another tribute to aviation's past, Rimowa, displayed a newly built Junkers F-13, a reproduction of the world's first all metal commercial transport. The original F-13 first flew on 25 June 1919, powered by a 170 hp Mercedes liquid cooled engine. The new model will follow the original trend of more powerful engines, flying behind a 450 hp P & W R-985. Amazingly, the last commercial flight of an F-13 took place in 1938. Parked nearby on Boeing Plaza for part of the week was the giant Airbus A350XWB, the latest in fly-by-wire and engine technology. Powered by a pair of Rolls Royce Trent turbofans producing 97,000 pounds of thrust each, the A350XWB demonstrated graceful tight turns and steep climbs during its arrival display. The Junkers and Airbus, the beginning and the future of airliners.

It's hard to believe that the contributions of NACA/NASA now span 100 years. NASA was back at Oshkosh this year displaying the amazing discoveries it has made since it was established in March 1915 to "... direct and conduct research and experimentation in aeronautics ..." Engine aerodynamics, drag reduction, wind tunnel technology, airfoil design, safety, high speed and high altitude flying, control systems, and of course, space flight are all part of its work to advance aerospace.

When you think of military planes, one can't ignore the evolution of the fighter. The Morane-Saulnier Type L was represented by a new replica, like the one Roland

Garros used in April1915 to stun the Germans. Twenty plus classic North American P-51 Mustangs that could escort the bombers on the deep penetration missions from England and Italy to targets in Axis territory called the Warbird area home. A North American F-1OOF Super Sabre, America's first supersonic fighter, made its first Oshkosh appearance. Today's Lockheed Martin F-35A Lightning II, the stealthy multi-purpose aircraft intended for the Air Force, Marines, and Navy, plus our allies, made its first public airshow appearance - yes, only at Oshkosh.

All this and more was background for the gathering of the family - those of us who call aviation home, what I once heard Terry Marsh call Nirvana. On Sunday afternoon after we'd helped secure the Stinson 6000B, we were greeted by Noel Allard, the head of the Minnesota Aviation Hall of Fame. After years of his prodding, I finally agreed late last year to serve on the board. But that was not all. During the week we connected with two other Hall of Fame honorees, Waldo Anderson, from the U of M flight school and Liz Strofus, a WASP. I'd interviewed Liz at AirExpo after she'd gone flying with the great Julie Clark in the T-34. Liz was at the WASP Museum booth. We didn't know she was going to be there. Timing.

An early morning walk to the north end on Monday included a stop to see an old friend of mine, Sierra Sue II, the first Mustang I ever called in an airshow. She was ably tended by restorers of the Bemidji-based Aerocorps Aviation headed up by Erik Hokuf, author Chuck Cravens, and researcher Tina Moore. Members of Wings of the North, whose Air Expo I'd just announced the week before, provided further ground support.

The Stinson 6000B was again parked near the Vintage Red Barn, sharing the grass with a pair of Douglas DC-3s. A number of really positive improvements were evident in the Vintage grounds on both sides of the creek. Mark and Marianne Kolesar are key parts of the Vintage Aircraft Association. It's always good to see them. Sue and I were also privileged to meet Bob Lumley, a long-time Vintage Director, who was working on an important oral history project. Sue was able to connect Bob with a gentleman who had worked at Stinson starting in 1935 at the Wayne, Michigan plant. History saved.

Anoka County Airport is home to what newspaperman Tim Henniger has described as vibrant airport "community." This is very true. Whether it is the cooperative efforts to support school STEM programs or bringing together the skills and people to put on our annual Discover Aviation Days, Jane's Field is indeed a community. And they were at Oshkosh in force. Among those present were Jeff Hall of C&P, Michael Lawrence of Key Air, members of Chapter 237 including Bob Heavirland, who displayed the Lockheed Little Dipper, Kim Huso who kept us all up to date on the status of Shelly's first child, retired DC-3 captain Tim Loft, Don Z, who makes the best mashed potatoes, and, of course, Greg and Suzanne Herrick, of the finest collection of Golden Age airplanes anywhere.

One cool morning Sue and I took the tram to the ultra-light runway and for a quiet hour watched the brightly colored ultra-lights make takeoffs and landings. We were surrounded by a sea of Aircoupes, polished Cessna 195s, Stinson l08s, Globe Swifts, and yellow Cubs. Conditions, perfect. Another morning we snooped through the four display buildings where I spent too much on books and looked at aviation art I could only dream about owning.

In the Boeing store on Boeing Plaza, I joked with a Boeing engineer about the irony of the rival Airbus A350 parked just outside with Boeing's iconic B-17, B-29, and B-52 bombers. He laughed, but commented, "If it attracts more people to see what aviation has to offer, then it's good timing." And that's what Oshkosh is about. Showing what aviation has to offer. Sharing our passion with the rest of the world and bringing young people, aviation's future, into the family. As Paul Poberezny once wrote, "Aviation seeds must be transplanted to future generations if we are to see our rich heritage passed on for others to see, to feel, to touch, to fly."

Late in the week I met Aerographics photographer John Slemp. He planned to shoot the Stinson at sunrise. The next morning, I ran into him again. John showed me some prints from his current project, photographing World War II A-2 bomber crew jacket art. The first print he showed me was from a 401st Bomb Group crew showing an outhouse with the name Uncle Tom's Cabin painted above the roof.

"That's the Walter Thomason crew!" I exclaimed. "He was my father's pilot. Dad was his flight engineer." John stood stunned, shaking his head.

"This was Walter Thomason's jacket. The family let me photograph it," he whispered. Now it was my turn to be stunned.

"I inherited Dad's jacket," I replied. Neither of us could explain the coincidence. Only at Oshkosh. Timing.

Lockheed Martin's F-35A Lightning II made its first appearance at a civilian air show. Two F-35A's from the 33rd Fighter Wing at Eglin AFB made a series of passes on arrival. One was displayed on Boeing Plaza beside an F-22A Raptor.

On the day of the International Parade, which represented over 2300 members from 80 countries, delegations from Brazil and New Zealand posed in front of the Stinson for group pictures. Off to one side were two middle-aged men with a red and white flag, seriously outnumbered by the delegations mugging for the camera. I walked out from under the shade of the Stinson's 60-foot wing as they enthusiastically waved their flag.

"I bet you're wondering what this flag is," commented the younger gent with a strong French accent. His older friend smiled and patted the flag.

"I don't recognize it," I admitted.

"It's Monaco, the smallest country in Europe. We're so small we don't even have a runway," he laughed. "But we do have a heli-pad!" With that, he gave me a white lanyard with the name Heli Air Monaco emblazed on it in bright red. When I got home I looked up Monaco in my desk atlas. He wasn't kidding. Monaco is less than two square kilometers or about .75 square miles. In my 31 years at Oshkosh, this was the first time I'd ever met someone from Monaco. Ah, timing.