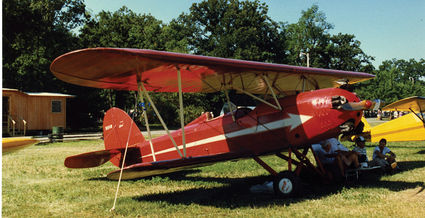 Known as the Bird, Brunner-Winkle Bird, and the Perth-Amboy Bird, this 1929 gem has a lot of history behind it. Luminaries such as Wiley Post, Lee Gehlbach, Clarence Chamberlain, and Milo Burcham all had Birds. The best known owner of a Bird Model BK was Charles Lindbergh who purchased one for $3500 in the fall of 1930 for his wife Anne. It was in NC727Y that she earned her pilot's license, passing her flight test on 29 May 1931. NC727Y still flies, now based in Maryland.

Produced under Approved Type Certificate #239 of 26 September 1929, to a design by Russian refugee Michael Gregor, the...