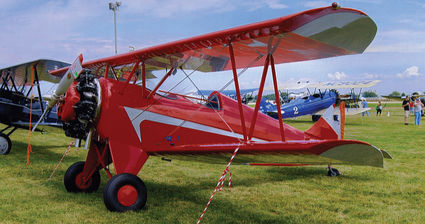 One unique biplane parked a little ways from Greg Herrick's Stinson trimotor that I was ground crew on, was the one of a kind Flaglor High Tow, a 220 hp Continental powered glider tug built by Ken Flagler in 1957 using parts from a Fleet 16B and a Waco. Also known as the Flagler Fleet, it was built to replace a Waco that he'd used to tow gliders, but had been wrecked.

Flagler is also known for the design of the Scooter, a homebuilt ultra light, usually powered by a VW engine that won awards at EAA back in 1967. Plans for the Scooter are still sold today. Today, the lone High Tow is registered experimental as N2840C to Tom Flagler of Mosheim, Tennessee.

Congratulations to Randy Corfman and the members of the Minnesota Pilots Association for another successful Great Minnesota Aviation Gathering at Golden Wings Museum in Blaine. Specially designed to appeal to the general aviation pilot, it featured a fine series of seminars and exhibitors. Mark Baker, President of the Aircraft Owners and Pilots Association was on hand, as were representatives of many general aviation organizations. Special thanks to Paul Ehlen for flying Sierra Sue II in on Saturday.

This is only the second time I've succeeded in stumping my eagle-eyed readers. The other time was with the WWII Fleet Fort RCAF trainer. Tom Ryan and Wally Gallian of Cameron, Missouri took valiant stabs at it, but, as they say, no cigar. Air show and fly in season is here. As always, brief before flying. Blue skies arid tail winds.