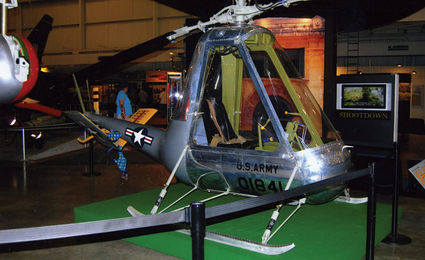 The American Helicopter Company was formed in 1947 and produced a small series of pulse jet rotor helicopters beginning with the A-5 "Top Sergeant" in January 1949. This was followed in 1950 by the A-6 "Buck Private." Neither design made it beyond the prototype stage.

In 1951 the Army Transportation Corps joined the Air Force in calling for a one man, lightweight helicopter that could be airlifted and used for observation or rescue. In June 1951 a contract was awarded to the American Helicopter Company of Manhattan Beach, CA, for its Model XA-8 or XH-26. The first of five prototypes flew in January 1952. The chief designer was Eugene Gluhareff, a Russian immigrant and associate of Igor Sikorsky. The XH-26 was tested between 1952 and 1954.

Called the "Jet Jeep" because it could be towed easily by a Jeep and could use the same fuel as a Jeep, the XH-26 could be assembled by two men with simple tools in about 20 minutes. Its range was 135 miles and ceiling was 7000 feet. Both the Army and the Air Force tested the XH-26, and while it met most specifications, its two tiny pulse jets were too noisy for general use. It also failed autorotation tests due to the undue drag of its rotor tip pulse jet engines. These faults, and cost, caused the project to be dropped.

In April 1954, American Helicopter became a division of Fairchild. The picture shows serial number 50-1841 on display at the National Museum of the United States Air Force, photographed not long after it came out of restoration. A second example, 50-1840, is on display at the Army Aviation Museum at Fort Rucker. This month's winner is Dylan Hinson of Ewa Beach, Hawaii. Other correct responses came from Timothy Aanerud, who knew the photo was taken at Dayton, Graydon Carlson, Joe Connell, and Bob Heavirland.