I checked the 300 mm on my Nikon for the third time and made sure the filter was clean. Arrival of the honored guest was only minutes away. She was an old friend. I'd first spotted her sitting among the clover on the east side of Flying Cloud Airport when I was finishing my private pilot license at Beech Aero. There was no mistaking her perfect lines. It was April 1983.

Another photographer by the gas pumps pointed and we listened, then watched as Doug Rozendaal made an overhead approach, followed by a left tum to downwind for runway 17. Canopy open, gear and flaps down, she passed over the fence, then the threshold, and settled gently on the numbers. Sierra Sue II had come home. Home to Austin, Minn., where she had lived with Dr. Roger Christgau, known around the Midwest airshow circuit as Doc.

I'd been asked by Roger's brother John (and fellow English major) to emcee the program and announce the air display. For me, it was an honor. Sierra Sue II had been the first of many Mustangs I've announced in air shows. That first time was Memorial Weekend 1991 at Planes of Fame, Flying Cloud Airport. I'd photographed her many times before that - at Offutt AFB, at Oshkosh, at St. Paul's Holman Field - and from 1991, called Roger flying her in shows around the Twin Cities. Although some called him Doc, to me he was always Roger. Many times on a Saturday morning at Planes of Fame a handful of us would push the Mustang out of the North Hangar so he could fly a "mission."

''No gas," he'd say and as I picked up a fire bottle, he'd do a quick walk around and climb in - no flight suit or helmet, just a baseball cap and a set of David Clarks.

I'd point at the engine and he'd twirl a finger, then the Packard Merlin would give a gentle cough, a puff of smoke, and it would be time for what I've called "The Song of the Merlin" for over 20 years. It was also a song of freedom. Now, it was back.

Roger Christgau (1931-2012) had been an Air Force F-86 and F-100 pilot, a top gunnery student and later, after service in the Far East, an instructor at Nellis AFB. Although badly injured in the 1957 crash of a Midget Mustang home built, he overcame serious physical problems to fly again - and fly the Mustang, the long range escort fighter supreme. He flew the Mustang to its limits and was a superb formation pilot.

By all rights, Sierra Sue II should not have survived. One of over 15,500 Mustangs built by North American in its California and Texas plants, it was assigned to the 402nd Fighter Squadron of the 370th Fighter Group, part of the tactical 9th Air Force.

Its wartime pilot was Lt. Bob Bohna. Ground support claimed many fighters and it was Bohna's third fighter. His first, a P-38, was damaged in the fall of 1944. He belly landed his second, a Mustang called Sierra Sue after a girl he never even talked to, in the spring of 1945. Enter Sierra Sue II, 44-63675.

I'd met Bob Bohna at Planes of Fame in May 1994. Along with Seth McKee, who'd commanded the 370th Fighter Group, and Roger's brother John, who'd written Sierra Sue II: The Story of a P-51 Mustang (Great Planes Press), he was there for the debut of John's book. My copy is more than special. On the title page Bob Bohna wrote, "I flew her first!" Seth McKee, author John Christgau, and Roger all signed my copy.

At the end of the war, Sierra Sue II sat on a German airfield awaiting her fate. She was shipped to Sweden, where she became Gul Kalle, the mount of Sten Soderquist during the Cold War. From Sweden, on to Nicaragua, duty as a gate guardian, and a reprieve when collected by David Allender in 1970. When Roger flew her back to Minnesota, she wore red and white and race #19. She never did race.

As Doug taxied Sierra Sue II to the ramp, family and a few early birds gathered. Cameras abounded. This was no ordinary homecoming. Fully restored to factory new condition by Erik Hokuf and his crew at Aircorps Aviation in Bemidji, MN, and now owned by Paul Ehlen, there is no finer Mustang restoration. Hyperbole? Well, perhaps, but I've seen none better. That sentiment was echoed by everyone who saw her over the weekend, including some with many years of restoration and flying experience.

Saturday dawned clear and bright. The fly in traffic filled the ramp at Austin Municipal Airport. A pair of Mitchells from the CAF and C&P, a trio of Beech T-34's, six members of T-6 Thunder, a PT-22, an L-5, a BT-13, an L-19 from American Wings, and a couple of beautiful biplanes - a Hatz and a Rose Parakeet.

The program featured a memorial video about Roger's life put together by Jennifer Christgau Aquino and Sally Christgau, John's daughters. I called restorer Erik Hokuf and new owner Paul Ehlen to the mike. Erik's pride in his team was more than evident. Paul was ecstatic about his new mount. This was followed by warbird flying, then lunch with much reminiscing. 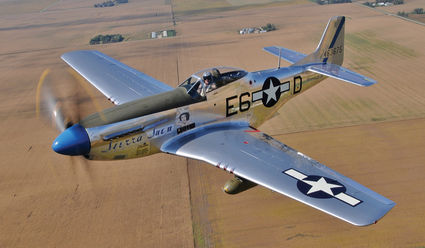 About 1330, as a few clouds gathered in the west, the Memorial Flight prepared for take off. Three T-6's and Doug Rozendaal in Sierra Sue II fired up and taxied to runway 17. After the Memorial Flight had disappeared to the south to form up, I read the closing statement, which was followed by the presentation of the American flag to brother

John Christgau and his family by Rollie Hanson, Commander of Austin American Legion Post 91 in Roger's honor. With the fading of the last volley of the rifle salute, I directed the audience's attention far to the south as the Missing Man Flight came in bound toward the ramp.

As Taps died away over the silent airport, Sierra Sue II made the pull heavenward, curving gracefully high and out of sight. After the T -6' s made their pass in review, Doug brought the Mustang around for a north to south series of passes, Sierra Sue II at speed, cavorting with the newly arrived clouds, in the air where she belongs. Roger would be pleased. His old Mustang once again was in touch with the sky.