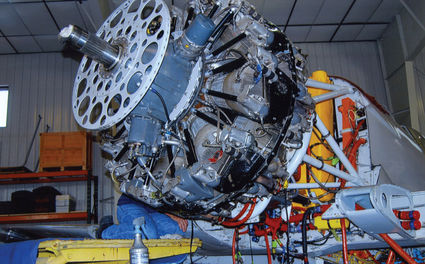 Sawbones' mighty Wright R-3350 Cyclone 18 radial engine. This 3050 hp R-3350-26 is from a Douglas A-1 Skyraider. Sawbones' engine is overhauled by Anderson Aeromotive of Grangeville, ID.

I snugged the crotch straps and aligned the shoulder harness - careful to keep the D-ring uncovered. CLIP. And CLIP again. Stage one done. Now for the four-point harness. Another set of shoulder straps - then the wide lap belt with the quick release, locked and set- almost.

The plugs for my trusty David Clarks are behind my left elbow. I ease the straps and Wayne deftly reaches under my arm pit and plugs in and I'm good. Good and tight. My old Nomex zipped. Velcro cuffs tight. Flying gloves slipped over the cuffs. Could have used a shoe horn.

Curt slides into the front seat and goes through the same routine. Parachute straps, four point harness - then his trademark red helmet.

"Can you hear me all right?"

I push the press to talk under my right hand, "Loud and clear."

Doug stands fire guard and Wayne, ever the tech guy, fiddles with his cell phone.

He might be taking a picture, but Mr. Low Tech, me, has no idea.

The big prop bumps through with a smoky CHUG, CHUG, COUGH, then with a BELCH, BLAST, and smoke, the 3350 comes to life. The canopy is open, so I get the full effect. The Sea Fury trembles excitedly, rocking as the engine kicks into a smooth, gutsy roar.

Curt taxis to the hold line.

"Anoka tower, Hawker Seven One Golf Bravo, at Fox Hollow, taxi to the active with the numbers."

We start to creep ahead.

Gentle S-turns. The big tail dragger passes HO Aviation. Dan White waves at us. I wave back. Then, into the run up pad and turn into the wind.

Curt goes through the checklist out loud. I appreciate this, because I learn from listening. In over 23 years of airshow announcing, other pilots have given me stick time or rides to help me understand their aircraft and its capabilities. Today it's Sawbones.

As he recites the pre-take off list, I feel something of Sawbones as a living and breathing airplane. She quivers and strains at her brakes, eagerly, achingly, wanting to fly. Power, speed, and history.

The throttle comes forward and 3000 horses change a mass of gray metal with Royal Canadian Navy markings into a fighter plane - proud and graceful, yet brutish. Once a warplane, now Race 71. Tomorrow, Curt and Crew Chief Doug Weske head for Reno.

The tail comes up and Curt holds her on, accelerating, gaining momentum, then, magically, the mains leave the asphalt. Wheels up, Curt makes the left tum out for the circuit, deftly adjusting rpm, manifold pressure, and trim.

It's overcast, with a low ceiling, light rain visible to the north and west. This flight is to test the drop tanks, make sure they draw correctly for Sawbones' cross country to Reno, with one stop in Casper.

Curt heads toward the St. Croix and Stillwater. Lake Elmo is soon off our starboard wing.

"There's the new bridge construction," he comments. I pick out the bridge piers, the stacks, and farther, the I-94 bridge at Hudson.

Down we go, contour flying, tight turns at cruise power. Sawbones is capable of well over 400 mph. The big Wright purrs - "a happy motor" as Curt puts it.

"I'll show you where Mary and I live."

Bank left, left being the way she'll go around the pylons in a few days, a turn about a point.

"Right there. See the garage?"

I see the garage. We're near Hudson.

Next he gives me an example of take off power - starting from cruise. The acceleration is amazing. No wonder the Sea Fury is a fine racer. I don't really feel any G's, the maneuvers are so fluid. We make another steep left turn and I try to imagine what turns about the pylons at Reno might be like. Sawbones flies that course at over 420 mph. Hawker got this one right. Steady, on a rail. A descendant of the Tempest II, the Sea Fury is the peak of third generation piston engined fighters.

Down over a lake where a friend of Curt's keeps a float plane, then we head northwest.

"We'd better skip back toward Anoka. There's some showers to the north. You doin' good?"

"More than good. This is seriously cool!"

I picked up Anoka slightly at our ten o'clock and listened as Curt called the tower.

"Hawker Seven One Golf Bravo is east with the numbers, airport in sight."

The tower likes the overhead approach.

A smooth curving turn, power coming back, the runway always in sight, scanning for traffic, three green, and over the fence, over the numbers, sweet kiss of the mains, holding the tail up, then down on all three. Home.

A small crowd gathers as we taxi into Fox Hollow. I've gone faster today than in any other piston engined aircraft, over 280 knots. It won't be long and Sawbones will be racing over the sage brush, rattlesnakes, and pylon judges at over 400.

Hawker, based at Kingston-upon-Thames at the site formerly occupied by the Sopwith plant, was known for fighters. Starting with the 200 mph Rolls Royce Kestral Fury biplane in 1931, it provided RAF with interceptors. Under the brilliant leadership of Sidney (later Sir Sidney) Camm, Hawker produced the Hurricane, the RAF's first 300 mph monoplane. The first Hurricane unit was No. 111 ("Treble One") Squadron under command of Squadron Leader John Gillan. The Hurricane was the backbone of Fighter Command under Air Marshall Hugh Dowding and Air Vice Marshall Keith Park during the Battle of Britain. Next came the unsuccessful Vulture powered Tornado, then the heavy weight Napier Sabre Typhoon, the RAF's first 400 mph fighter. Although the Typhoon suffered teething troubles, it evolved into a superb ground attack platform.

The Sea Fury emerged from the Tempest series. First was the Sabre Tempest, famous for destroying German buzz bombs, then the excellent Tempest II with the 18 cylinder Bristol Centaurus sleeve valve radial. Influenced by a captured Focke Wulf FW-190A, the Tempest II had efficient exhaust ejector stacks and a tight cowling over its 18 cylinder 2520 hp Centaurus radial.

In an effort to produce a lighter, smaller airframe, Hawker proposed the Fury to the RAF - effectively a smaller Tempest II. By now, it was the jet age and RAF squadrons were operating Gloster Meteors with de Havilland Vampires coming out of the factory. The RAF declined the Fury, but the Royal Navy, not yet ready for jets aboard its carriers, found the 460 mph Sea Fury the ideal compliment to its more fragile and shorter ranged Seafires.

Production FB.11 fighter-bombers carried four 20 mm cannon and 2000 pounds of ordinance. First seeing combat in Korea, they were used for ground attack and combat air patrol. Lt. Peter Carmichael of No. 802 Squadron, based on HMS Ocean, was credited with shooting down a MiG-15 on 9 August 1952. Hawker did strong export business with Furies, with sales to Australia, Burma, Canada, Cuba, Egypt, Germany, Holland, Iraq, Morocco, and Pakistan. Royal Navy Sea Furies were retired in 1955, replaced by Hawker Sea Hawk jets, but German target tugs, continued until 1970.

The Sea Fury came to air racing in the early 1960's. It was fast, airframes were plentiful, and it was capable of being modified. Powered by Pratt & Whitney R-2800, Wright R-3350, and Pratt & Whitney R-4360 radial engines in addition to the Bristol, Sea Furies have been raced by Mike Carroll, Sherman Cooper, Lloyd Hamilton, Howard Pardue, the Sanders family, George Baker, who had built up what is now Sawbones, and many other well-known pilots. This Reno's contingent of Sea Fury drivers were Robert "Hoot" Gibson in 232, Dennis Sanders in Dreadnought, Korey Wells flying 924, Mark Watt in Argonaut, and Sawbones, flown by retired NASA astronaut Curt Brown.

This year Sawbones brought home the 4th Place Trophy in the Unlimited Gold. After qualifying 5th at 422.358 mph, Curt took Silver Heat #1 at 416.159 mph, advancing to the Gold. Tail wheel retraction issues limited Sawbones to 388.068 mph in Gold Heat #2, but Crew Chief Doug Weske and crew solved the hydraulic problem, so that in Gold Heat #3, Race 71 topped its qualifying speed with a fine 424.592 mph. This set the stage for the Sunday showdown.

Reno 2014 was a week of drama. Tiger Destefani attempted a comeback in Strega, only to retire from racing on the final day after being disqualified for flying too high Saturday and "cooking" his engine. Early in the week, Lee Behel was killed in the crash of a Sport Class GP-5 named Sweet Dreams. Hoot Gibson force landed Sea Fury 232 after it blew its engine on Monday and was out of the races, the third time in four years 232 was not able to finish. Precious Metal, a Griffon P-51, forced landed with coolant trouble, but was repaired, only to be disqualified in the Gold Final for cutting a "dead zone." Mark Watt in Argonaut dropped out of the Gold Final after one lap with engine issues. Fan favorite, Rare Bear, the R-3350 Grumman F8F, pulled out of the finals on the first lap also with engine problems.

Air racing can be a battle of attrition. Who endures, finishes, and places. 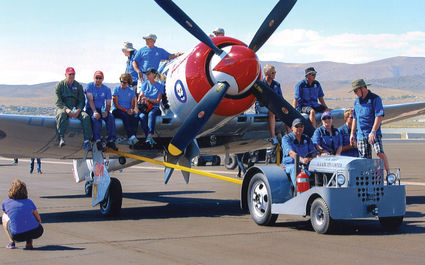 Sunday's Gold Race is what it's all about. Sawbones and the crew on Sunday's "Duck Walk" in front of the grandstand. Race pilot Curt Brown sits on the wing, far left, wearing a red hat.