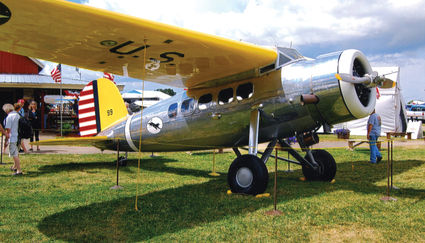 Once serving with Braniff (1934-1939) and later Northern Consolidated Airlines (1948-1952), this metal fuselage Lockheed Vega DL-1B Special is the only example flying. Delivered in 1933, N12288 was registered under Group 2 Approval #448 after being assembled from parts from Detroit and Burbank factories by Richard Von Hake.

My allergies are acting up. I wipe my nose with a rumpled cotton handkerchief that normally is stuffed in my back pocket. Sue grimaces at this practice, but wisely says nothing. I start the Jetta, trip the wipers, fore and aft, to get the dew off the windscreen, and back out, down the steep driveway from the hotel parking lot, and head for Wisconsin 44 at Ripon's 25 mph. Up the long hill, past the old cookie plant, workers carrying lunch pails, walk into the side entrance, past the sweet corn stand and the Marathon station, bumping twice over the seldom used railroad tracks, to the tight curve that leads out of town to Oshkosh.

Low mist hangs over the corn and bean fields as I settle in with the six-thirty commuters and accelerate northeast. A couple of sand hill cranes strut majestically in a cut brown field, oats Sue says, while overhead traffic departing Wittman Field, hoping to get home before the afternoon showers, drones overhead. Around another corner and down an incline into little Picket, almost unchanged in 30 years of traveling this road to the convention. Change. Almost. The old corn canning factory is silent, no more huge trucks trundling about with produce, but the neatly manicured cemetery across the road has grown. Figures. Not until just before Oshkosh does the road widen to four lanes and our progress is impeded by stoplights.

I park in the Blue Lot these days. It's close to the Red Barn where the Stinson is tied down on the grass, allergy inducing, but way better than the heat of the cement or asphalt. Hang in there, Old Sport, I remind myself. "You're doin' good," as my CFI would say. Good? Well, I'm a retired English major, but what the...

There's a little mud this morning. Whoever has the wood chip concession is doing a fine business. I smile at the cute girl in the ticket booth and hand her a ten. She smiles back and hands me a red parking permit for the day. Smiles. That's good. Crunch over the gravel and swish through a few shallow mud puddles to the little, round faced kid with the orange wands, his wide face laughing, hat on backwards, who hands me off to a sour faced pair of girls who'd rather be texting than directing traffic. Front row on the south side today. Nice. Two days ago, on the north side, I'd forgotten to write the row number on my hand where I normally write frequencies, and I couldn't find the VW for fifteen minutes. Must be getting old.

Since it's early, our wait at the crossing is short. A quick whistle and more wands move Sue and me and the other early birds across the pavement toward the entrance's radial engines and three guys struggling to put up a supposedly easy to assemble pop up tent. I hate pop up tents because I'm short and can never reach the top when the legs are extended. They have my sympathy. We already have white wristbands, so it's past the orange vests with the eagle eyes and to the bag check table.

"Just the camera," I grin back.

She pats me on the shoulder as she's done all week and rasps, "Have a great day."

We're walking into the sun, east down the long line of business aircraft, engine manufacturers, and green and blue plastic trash cans. Two garbage trucks with yellow vested workers in heavy boots are cleaning up yesterday's mess. A large Port-O-Let stands at dew covered attention along the diagonal road. Pace, pace, asphalt then concrete, pace, pace, toward the Stinson. Others with cell phones glued in their ears or seemingly talking to themselves, a stroller with a sleeping kid, mom and dad chatting about the Thunderbirds, and the ever present golf carts ignoring the pedestrians, hell-bent on getting somewhere in a hurry, even though it's only seven.

We stop at a recently cleaned line of johns, unlike the blue and pink ones at Reno, all grey, then head to the Warbirds. There's supposed to be some WWI replicas, but so far, they've not arrived. Past the Aces Café, where, in the 80s, a rotund woman would sing out "Good Morning, Oshkosh," yodel like a champion, and hand out the best donuts in the world, all the while laughing and teasing early risers about their waist lines. Yes, there really were good old days.

It's thin on the north end. The Mustangs are out to play over the big lake and two Beech 18s are being loaded with baggage for a quick getaway. Don Egge, a colleague from American Wings, is driving a Gator. He marshals the bombers. Right now the bombers, mostly B-25 Mitchells, are silent in the yellow morning sun. Don and I are about the same age, retired, and addicted to old airplanes. His buddy, Bill, has a beard as white as mine. One very noticeable thing at Oshkosh is the age of the participants. Lots of senior citizens.

I photograph a shine Lockheed T-33A and Ron Fagen's newly restored B-25N "Paper Doll." Ron's also got his P-38 and P-40 displayed. Earlier in the week, four T-33s had flown some very nice formation. Two Curtiss JN-4 Jenny trainers are on display, one without fabric and engine, the other a fully airworthy reproduction powered by a V-8 car engine. We spend time with Steve Sachs, one of Jenny 38262's pilots. He describes the construction and the engine problems that have resulted in numerous "off field" landings. Steve and Sue (my farm girl wife of 41 years) discuss whether it would be better to force land in a corn or bean field.

Down the line of kit planes we hike, admiring the workmanship and creativity, including a full scale Sopwith Pup. The agile Pup helped the Royal Flying Corps regain air superiority. It also was used by Commander E.H. Dunning for the first landings aboard a ship, HMS Furious, that was under way. Unfortunately, on his third pass, the Pup went over the side and he drowned.

The Stinson is parked next to a rare Fairchild 71 in original Pan American colors and a classic DC-3. The old girl's nose is right at the tighter crowd line along the speaker poles that is necessary for the USAF Thunderbirds aerobatic box. Already, lawn chairs rest along the line etched in the grass. We've had to remind some folks to fold and lay the chairs down so the wind won't blow them into the parked fabric covered aircraft. Most understand. Some non-aviators don't get it.

I put the Stinson's sign out, add to gravity's effect with a sand bag, and unclip the tarp, or nose mitten, over the center engine to drain the water from last night's rain. The water runs up my arm and down my sleeve. That happened yesterday, too. Guess I didn't learn the first time to stand to the side.

Paul Poberezny once said, "As a result of EAA, I have become a millionaire, because I have a million friends through aviation." I learned what he meant again this year.

Around the grounds, and at the Stinson, we renewed acquaintance with people from all over this country and the world. Crew chief and photographer Kevin Hill stopped again. We've met at Oshkosh for years, discussed the state of aviation, and our shared commitment to preserving aviation history. Rolf Ringgold, who has nailed Mystery Planes such as the Dayton Wright Racer and the Kinner Sportster, introduced himself. Roger Gomoll flew his classic Travel Air to Oshkosh. I used to do some hanger flying with his father, Stan, at Anoka.

Joe Kittenger, who made a parachute jump from 102,800 feet on 26 August 1960, in Project Excelsior III, had test flown the Stinson years ago. It was great to meet another pioneer. Joe told me about the Stinson's flight characteristics.

And speaking of pioneers, tucked away with the static airplanes was Chuck Doyle's old Stearman. When I was a kids, my dad would take me to Memorial Stadium to Gopher games. Most Saturdays, a blue biplane would circle the field towing a banner that read, DIAL RAW BEEF. I never knew what it meant. That is, until this Oshkosh. Chuck Doyle, Junior, was there. We'd met at Flying Cloud during a show I announced, and later again on a Sun Country trip to the NASM at Dulles. So, I asked. Chuck grinned and laughed.

"Dad used to know an old bootlegger. After Prohibition, the guy went legal, and it just so happened that his liquor store's phone number worked out to DIAL RAW BEEF." So, fifty years later, I got the answer. 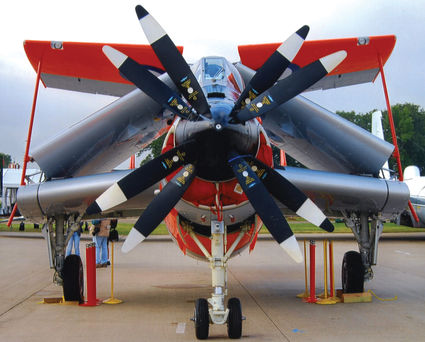 The mantis-like Fairey Gannet is powered by a Double Mamba turboprop. Once based at KANE with the Polar Air Museum, it now flies from New Richmond, WI, with Shannon Hendricks.

Airplanes and people. People and airplanes. At Oshkosh it's a balance. Where else might you see seven gorgeous Lockheed L.12A Electra Juniors lined up in the sun across the creek from the Red Barn? Watch a NASA WB-57F high altitude recon aircraft arrive? Meet a Chinese delegation brought to the trimotor by Dale Klapmeier of Cirrus? Witness the replica Gee Bee QED II make high speed passes? Or talk Stinson with Vicki and Kevin Bailey from Perth, Western Australia. They own one of only two Stinson Reliants in Australia. VH-UXL has an impressive history. It was imported before WWII and served with the RAAF. Winner of many awards, Kevin and Vicki fly it regularly to air displays. A delegation from the Vintage Aero Club in Portugal is restoring a D-Day veteran C-47/DC-3. This enthusiastic group, led by photographer Mario Abreu, was on its first visit to Oshkosh.

I hear a snarl and look towards runway 36. Just launched and turning out to the east is the world's only airworthy Lockheed Vega. A rare metal fuselage version, this ex-Braniff veteran is painted like a pre-WWII Army Air Corps C-12 transport. It's a tribute to the restorer's art. Imagine, a flying 1933 Lockheed Vega. Earlier, one of the Fairchild 71s took off. Only at Oshkosh could this happen. And it's not even lunchtime!