We didn't get drowned, mired in the mud, scorched by the sun, knocked over by a 50 mph gust front or wilted by the heat index. Was it really Oshkosh? The weather proved unusually mild for a change, but there were other noticeable changes. Large empty spots due to sequestration appeared on the main display ramp, in the Federal Pavilion and in the FAA building. Modern military aircraft were absent, as was participation by NASA. Zaug's, the seemingly perpetual food vender was gone, replaced by a number of "restaurant" concessions. More variety sure. Prices? Well, you be the judge. Changes were made to the afternoon airshow and the old drinking fountains had been pretty much torn out.

What wasn't changed was the EAA spirit and the extraordinary variety of aircraft and – yes – the people. Under the wing of the Stinson SM-6000B we met folks from France, Israel, New Zealand, Australia, Portugal, Germany, Chile, Great Britain, Canada, South Africa and Brazil. Often we couldn't speak the other's native language, but that didn't matter. We still succeeded in communicating. We all spoke aviation.

One afternoon, a Chinese delegation was brought to the Stinson by Dale Klapmeier, the Co-Founder and CEO of Cirrus Aircraft. He wanted them to get a feel for aviation history. I gave them a cockpit tour using an interpreter, a lot of smiles and shared laughter about the old Stinson carrying livestock. Then I got corralled into posing for pictures with most of the visitors. I hope I didn't break their cameras.

Minnesotans were everywhere at Oshkosh. My American Wings colleagues Don Egge and Dave Taylor were volunteering with the Warbirds. Don was marshaling again and Dave, who can make just about any metal part you might need, was working Warbird Maintenance. Warbird recovery expert Lex Crawley, who stopped at the Stinson, is featured in the new Nick Veronico book, Hidden Warbirds (Zenith Press, 2013) for his Brewster Corsair recovery. Sue and I spent time hangar flying with Marianne and Mark Kolesar. Yearly fixtures of the Vintage contingent, they're part of what makes the Red Barn the place to stop and shop.

Golden Wings' pilot Jim Obowa, who flew the Fairchild FC-2W to Oshkosh, regaled us with hilarious flying stories. Roger Gomoll had flown his Travelair biplane along with Jim in the Fairchild and Greg Herrick in the Stinson trimotor. Merle Marshall, a dyed in the wool Stinson guy (love that big tail 108!) who works at Flying Cloud, was excited to see a newly restored Stinson SR-5.

The Vintage Round Engine Rodeo where we were parked attracted all the classic names in American radial engines. Up the hill to the south of us sat neat rows of radial engine biplanes, high wing monoplanes, two powerful Howard 500's courtesy of Tony Phillippi, a gorgeous Lockheed L.12 that had appeared in the movie Amelia, a classic DC-3, Beech 18's, and three Grumman amphibians – a Widgeon, a Mallard and an Albatross. Waco, Beech, Travelair, de Havilland, Spartan, Stearman, Monocoupe, Stinson, Bird, Cessna, Howard (as in Benny Howard of Mr. Mulligan fame) and Flagler (ever heard of that one?) were tired down celebrating the air-cooled radial.

Continental powered Stearman trainers rubbed shoulders with the Lycomings on Greg Herricks's Stinson trimotor. The "pock-eta-pocket-eta" of the Kinner on Ryan PT22 vied with the deep snarl of the Pratt & Whitney R-2800's on the Howard 500. The smaller Pratt and Whitneys on the two Ford Trimotors selling rides, Warner, Jacobs, Whirlwinds and Cyclones all created their special and very historic music.

Radial engines proved lighter for their power and more reliable than their liquid cooled counter parts. They cut forced landings by 25 percent due lack "plumbing problems," and became, after further development and increased horse power, the choice of the airlines for their Ford, Stinson and Fokker trimotors; their Boeing, Douglas and Lockheed twins; and the Boeing, Martin and Sikorsky Clipper flying boats operated by Pan American.

The Army Air Corps, later Army Air Force, grew up with radials on the Martin B-10, the Boeing B-17 Flying Fortress and the Consolidated B-24 Liberator. The Navy opted for reliable radials for carrier based fighters, scout bombers and torpedo bombers built by Boeing, Curtis, Grumman and Vought and flying boats manufactured by Consolidated and Marin. During World War II car builders Buick, Chevrolet, Dodge, Nash and Studebaker built radial engines under license.

Whether you like staggerwing biplanes, old DC-3 airliners, sleek all metal speedsters like the Spartan Executive, or the fighters and bombers that defended America, the Vintage Round Engine Rodeo and the Warbirds of America gathered significant examples of the airplanes that created and changed the face of aviation. It was a truly impressive and historic event.

Thursday, Sue and I visited the Pioneer Airport and AirVenture Museum. People waited in long lines for flights in the Bell 47's and little kids tried their skills at the tasks offered by KidVenture. Back at the Museum we made a special stop at the air racing exhibit. In September it'll back to Reno for the 50th Anniversary races with Minnesota's Unlimited Air Racer Sawbones. 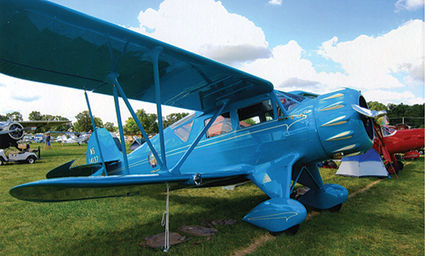 Waco YKC N14137 from 1934 is powered by a 275 hp Jacobs. It was named Antique Grand Champion for owners Dave and Jeanne Allen of Elbert, CO.

A marvelous recreation Audrey Poberezny's original office, plus a room filled with memorabilia about the early days of EAA had been created upstairs in the Museum. I'd met Paul earlier in the week as he rode in his VW "Red One." Ever gracious, he paused to give me a "thank you" and the airman's thumbs up. From small beginnings, EAA has grown into the main voice for sport aviation, a voice that is ever so needed with General Aviation threatened by many challenges.

Change is hard. Although some members griped about the commercialism of the Convention, worried about availability of 100LL, were concerned about insurance and medical problems, there was still that clear, ever present sense that GA will prosper. The creativity, passion, innovation and joy that participants share at Oshkosh will translate into growth for General Aviation. As one sun burned EAA member about my age quipped, "There's a hell of a lot wrong with the world today, but ya know, I'm vertical and at Oshkosh with other flying crazies. We've even got more flush toilets. What could be better?"