Airport Of The Month – Grand Rapids 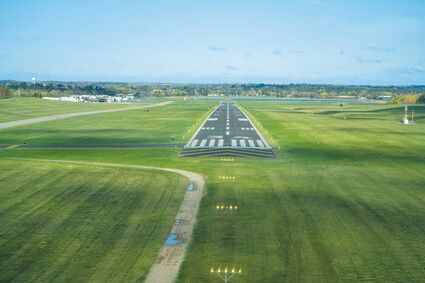 In 2021 the 5,750 by 100-foot runway at Grand Rapids was resurfaced by removing the old pavement and replacing it in kind. At the same time, extensive drainage improvements were implemented, including the installation of a full sub-surface system.

Over the centuries many different types of pavements have been invented by humans to make travel easier and keep things moving regardless of the weather. Beginning around 300 BC the Romans built first-class roads, many of which are still in use. The Empire's engineers designed highways that were crowned for drainage, had curbing, and were often paved with cut rock or cobble stones.

Later European civilizations lacked the Roman ingenuity and sometimes used corduroy for paving. Not old pants, but logs laid perpendicular to the roadway. Early in the 19th century "Macadam" was popular. Its formula was packed crushed stone and sand bound with cement or bitumen. The inventor was a Scottish engineer named John Loudon McAdam. Sometimes bricks were used on streets and sidewalks. They were inexpensive and more durable than Macadam, but they were only economical when labor was cheap. Surprisingly Mordecai Levi of Charlston, West Virginia, was able to patent brick pavement in 1870.

Modern pavements are usually Asphalt Cement Concrete (ACC) or Portland Cement Concrete (PCC) constructed on an aggregate base. Grand Rapids, Minnesota, has a road paved with bricks, but the main runway at the Grand Rapids-Itasca County Airport is surfaced with ACC. Even Asphalt doesn't last forever and by the second decade of the 21st century the 40-year-old pavement needed replacement. Runway resurfacing requires some careful engineering, but the basic formula is well known. The tricky part is minimizing impacts and keeping the airport operational.

At Grand Rapids this was accomplished by making it a two-phase project so that either the secondary runway was useable or at least 4,000 feet of the primary runway. In 2021 the 5,750 by 100-foot runway was resurfaced by removing the old pavement and replacing it in kind. At the same time, extensive drainage improvements were implemented, including the installation of a full sub-surface system. Once paving was complete, the surface was grooved to improve braking.

Also, airfield lighting controls were given a complete overhaul and an access road was relocated to bring the airport up to federal and state design standards. All this was accomplished for a construction cost of about $3.4 million. 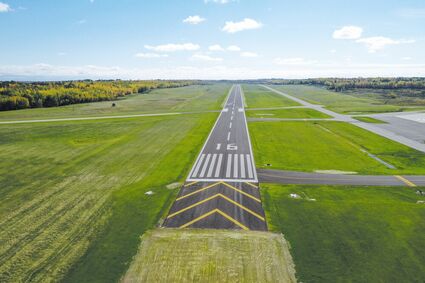 Brick paving was popular in industrial areas of big cities to support heavy vehicles. Those areas are mostly "gentrified" these days, but some have new brick streets because it adds to the "ambiance." Brick paving in downtown Grand Rapids is different. For one thing, the bricks are yellow because this is the hometown of Frances Ethel Gumm, aka Judy Garland. At age 16, Garland started her screen acting career as Dorothy in the 1939 movie "The Wizard of Oz." You can follow the "Yellow Brick Road" just like Dorothy and Toto did, only in Grand Rapids it will take you to the fully restored Central School Building and Market Place. A museum dedicated to Judy Garland and the "Wizard of Oz" is not too far away as is the Itasca County Historical Society making Grand Rapids a great fly-in destination.

A happy Grand Rapids historical coincidence involves Duane Elliott, an alumnus of the Central School. Elliott was so fascinated by aviation that his classmates gave him "Buzz" for a nickname. He was a fighter pilot in World War II and went on to found the firm (Short Elliott Hendrickson or SEH Inc) that engineered the paving project.