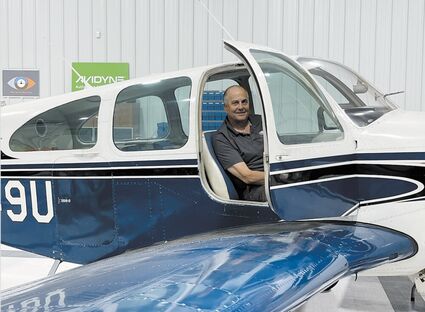 Lake Elmo EAA Chapter 54 members learned about Jay Schrankler's plans for the Debonair last November. The Debonair was purchased by the former Minnesota Department of Aeronautics and passed through a number of small businesses.

There a whole lot more to the story, however. The aircraft has been a Minnesota aviation fixture its entire operating life. That's one reason why Schrankler has a refined strategy for improving the aircraft's 1980's era avionics.

The Debonair was purchased by the former Minnesota Department of Aeronautics and passed through small businesses around the metro, including Modern Aero (KFCM), Executive Aero (KFCM), Gopher Aviation at Rochester International Airport (RST), Mercury Aviation (KSTP), and Northern Airmotive (KSTP).

The Beechcraft was owned for many years by 3M corporate pilot Louis Berney. It was sold posthumously by Berney's estate to Barry Hammerback in Wisconsin. Hammerback, Schrankler, and Pat Ehlenfeldt founded Perceptive Avionics at the New Richmond Regional Airport (KRNH) to service

a two-state GA market with pitot-static and transponder certifications and to perform panel upgrades, installing

the latest technology into older aircraft. Schrankler bought the Debonair from Hammerback with the commitment to upgrade and restore N8949U.

Schrankler worked as an engineer and then as an executive for Honeywell's aerospace and controls business for 27 years. He's particularly passionate about the history of civil aviation. For a period of time Schrankler had an autogyro dealership and was located at Hummingbird Aviation (now AV8) at KFCM.

He used to help former Hummingbird owner Chris Cooper as a business consultant. Cooper established Hummingbird Aviation, first at the airport in Faribault, Minnesota, in 2002 and later at Flying Cloud Airport in Eden Prairie, which he operated until its sale in 2019.

Cooper was also a member of Minnesota Soaring Club at Stanton Field.

Schrankler has an aviation consulting business called Aero1217 and their projects are helping companies bring new technology to market or improve their business operations. He taught a graduate course at the University of St. Thomas called Aviation Technology and Flight Systems.

"I had wanted a faster cross-country aircraft, and an upgrade from my former Cherokee 180 and now Cessna 172," Schrankler said. "The Debonair was in Barry's hangar and I was completely intrigued by its local history and perfectly fit the bill for my next flying mission."

Schrankler is in the process of a new engine installation, new avionics, interior and possibly tip tanks. "I want to keep the plane as true to its history as possible," he said. His timeline for the aircraft?

"I plan to start the avionics work on July 1, and that will be done by the end of August," Schrankler said. "That's what I call the 'Big Phase 1' for the aircraft. There are two other things that we have to do. I hope to have the interior redone by the end of September. Once the avionics are in, I can fly it anywhere."

While Schrankler would like to increase the Debonair's overall fuel capacity, his only option with the aircraft is installing tip tanks.

"Here's the conundrum: Do I leave the aircraft in the condition that it was purchased back in 1965 by the State of Minnesota to preserve its history, or do I modify it by putting tip tanks on it? I'm leaning toward not doing the tip tanks," he said.

For the avionics upgrade Schrankler said he selected an Aspen PFD for the panel and the Avidyne stack for the GPS, navigation, radios, transponder, and autopilot.

When upgrading an aircraft, Schrankler's rule of thumb has always been making the aircraft as safe and reliable regardless of how it looked or ran in the past, he said. "That's why

I decided on Aspen. It's a modular product. I'm putting in two, 7-inch panels. They are completely redundant with one another," Schrankler added.

Schrankler said it's critical to have great GPS in any aircraft, so that's why he decided to install an Avidyne 440 and 550 as products. The units are plug-replaceable with Garmin's 430 and 530 products. "I don't have Garmins in my current aircraft, but the other thing I like about the Avidyne product is whatever you see on the screen, you can mirror it on your iPad," Schrankler explained.

Perceptive Avionics was started in early 2021 during the COVID-19 pandemic. 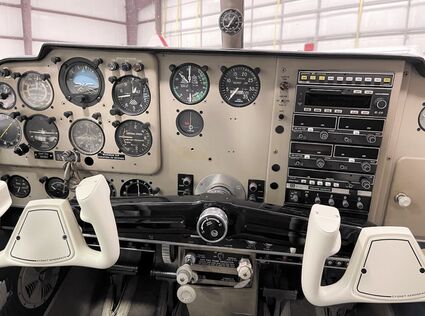 Jay Schrankler is in the process of installing new avionics in the Debonair. "I want to keep the aircraft as true to its history as possible," he said, and plans to start the avionics work on July 1, and be done by the end of August.

A serendipitous set of circumstances occurred when Schrankler met Ehlenfeldt at the New Richmond airport. "Pat is a veteran of the 3M aviation department and has nearly 30 years of avionics experience and is an AP/IA," Schrankler said. "We talked about starting an avionics business to fill a need in eastern Minnesota and western and central Wisconsin, and even maybe making some new products ourselves. We ended up talking about it to Barry Hammarback. The three of us decided to become partners. In August 2021 we received our FAA Part 145 Repair station certificate." There's another thing the trio brings to the party as a business, Schrankler said. "All of us are pilots and we have a combined 100 years of industry experience."

When people come looking for an upgrade, the first thing Schrankler tells them is to remove the vacuum system. "If you're going to do anything with the aircraft, get rid of it. You'll save 25 pounds right out of the gate, and your reliability and safety goes up. That's the first thing you should spend money on. Twenty-five pounds is 25 pounds and four or five gallons of fuel."