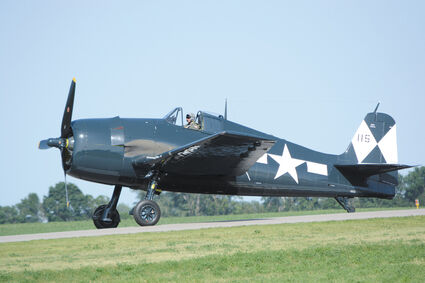 "Pride of the Pacific" was this year's theme for the Granite Falls airshow which included Fagen Fighters' own former U.S. Navy aircraft. Pictured on the taxiway is Grumman F6F-5 Hellcat "Death 'N Destruction."

"Pride of the Pacific" featured more than 40 vintage and period-specific warbirds on the ramp, said Diane Fagen, director of the Fagen Fighters WWII Museum.

"We are not sure of total numbers yet, but attendance was in the thousands," Fagen reported in a day-later event recap. "The weather certainly was hot, but we do not feel it significantly impacted attendance." The entire Fagen family is involved with the event, as well as ma...