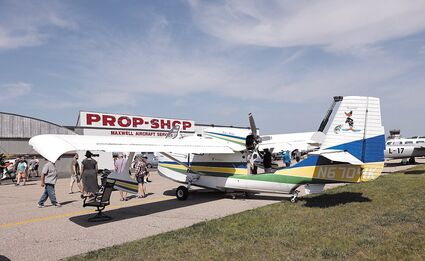 Wrapping up another Crystal Airport Open House provided a bittersweet moment for Luke Gustafson. This year's record-setting event was his last as lead organizer.

"I'm only 48 years old, but I started with this event when I was 18," Gustafson said, adding he's been at Crystal Airport 30 years and involved with the event 28 years.

Gustafson flies a Cessna 172 with a smoke system, and he's training his godson, Odin, to fly it. "The day I took off in the thing, I cried," Gustafson said. "It reminds me every day of Paul Weske. I'm hoping Odin steps in and works this event. He goes with me to Oshkosh every year, and he's getting ready to enlist in the U.S. Army."

Weske, of Inver Grove Heights, passed away in 2012 after a long battle with cancer. He was born in Moose Lake, Minnesota, on June 17, 1932. Weske served in the U.S. Army from 1952-1954. He retired from Northwest Airlines after 32 years of service. Weske had a great love for flying. He was a private pilot, a member of the Metropolitan Airport Commission, and served as the president of the Confederate Air Force (Ghost Squadron Southern Minnesota Wing).

Participating aircraft at this year's June 19 Crystal Airport Open House included a B-25, a SNJ, BT-13, L-29 jets, a Huey helicopter, two T-6 Texans and an L-17 Navion, Gustafson said. Estimated attendance was 2,500 to 3,000 people. "We served 650 people, and veterans and pilots ate free. We served 140 veterans. The pilots all paid for their breakfasts. None of them accepted a free breakfast." Crystal City Council Member Dave Cummins took good care of the breakfast this year, Gustafson added.

"This year, we lost $4,000, because we did not do much fundraising, but VFW Charles Knaeble Post 494 kicked in $3,000, and Westphal American Legion Post 251 provided $1,200, and they paid for veteran meals. Those are the only donations to the event," Gustafson said.

"This was the best turnout we've ever had, and the largest crowd we've ever had in the history of the Crystal Airport Open House," Gustafson said, adding this was the second year he was in charge of the event.

"We added a car show this year and crafters, and ran out of space for airplanes. I want to thank all of the volunteers personally for their time and effort," he said. 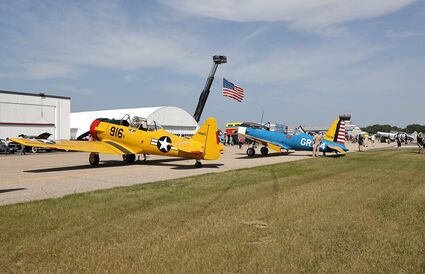 While Gustafson is retiring from managing the Crystal Airport Open House, he did add it's likely he'll come back to help. The day after the event, Gustafson called the Crystal tower on his handheld radio with this message: "This is Twin Town Productions Open House. I'm signing off after 28 years. Thank you." Tower staff acknowledged his call, and returned the thank you.

The Crystal Airport is a hidden gem in the Metropolitan Airports Commission system of six reliever airports, Gustafson contends. "There are so many memories on this field," he said.

Crystal Airport Manager Mike Wilson said it's important the public come to the airport each year and enjoy everything there. Such activity continues to promote GA.

"They are able to take affordable rides in helicopters and fixed-wing aircraft and will hopefully get bitten by the flying bug," Wilson said. "We welcome and want the public coming to the airport. Crystal is surrounded by development and we want the community to understand its importance and the activities that take place here."