Airport Of The Month – International Falls 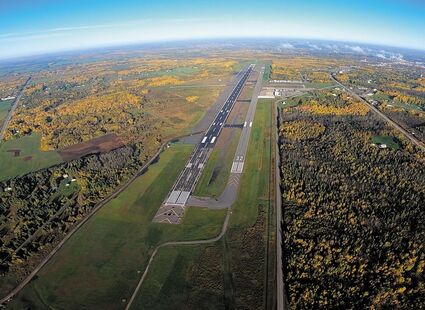 Another runway extension was required bringing the main runway at Falls International Airport to a length of 7,400 feet. The newest 900 feet was traditional pavement on aggregate and proved more durable, so when the reconstruction began in 2020 a similar design was used to replace the older 6,500 feet.

Charles Lindbergh was an environmentalist. After his many accomplishments in aviation, he became an enthusiastic steward of the planet. In 1969 the proposed Voyagers National Park had his attention and Mr. Lindbergh traveled to International Falls to see for himself. He called Einarson's Flying Service to rent an aircraft. Francis Einarson took the request and said, "Who is this?" Charles Lindbergh was the reply, to which Einarson said, "Yeah, and I'm Jimmy Doolittle."

That got sorted out OK, but Einarson insisted Lindbergh have a check out in the PA-18 float plane he was going to rent. "O...