Message Is Delivered Underneath Bellanca Citabria 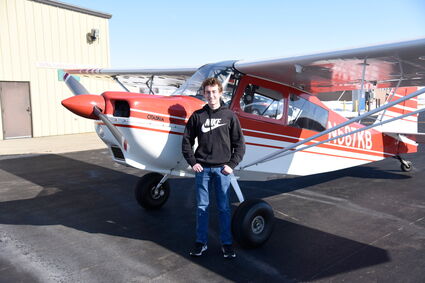 Carter Ricard, from Albany, arrives at the Sauk Centre Municipal Airport March 14. He flew over the house of his girlfriend, Olivia Kompelien, to ask her to prom.

Less than three months after getting his pilot's license, Carter Ricard took off from Sauk Centre Municipal Airport to undertake one of his highest-stakes flights so far: asking his girlfriend, Olivia Kompelien, to prom. Ricard is a junior at Albany Area Secondary School and lives in Albany.

Flying is a big part of his family. His father, John Ricard, is a crop duster, and his mother, Cindy Ricard, is a commercial pilot for Endeavor Air, an American regional airline that operates for Delta Air Lines. Cindy is also a flight instructor. She taught Carter how to fly. Prior to getting his lice...