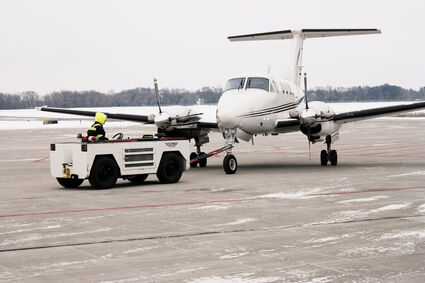 Governance was transferred from the city to the St. Cloud Regional Airport Authority, which was formed through a joint resolution with Benton County, Sherburne County, and Stearns County, with each entity appointing volunteer commissioners to the authority.

was created as a fiscally responsible plan to develop

general and commercial aviation and provide the most

economical and efficient use of the area's aeronautic facilities and services.

The transfer to an authority governance

structure creates an independent governing structure with a board whose sole purpose is the daily operation and future development of the airport.

The transition agreement states the city will support a number of functions at the airport for up to 10 years.

The airport will receive voter-approved regional sales tax dollars through 2038.

"It's great to be here on the last day of the year to get this done," Kleis said during a Dec. 31 press conference, adding nearly 60

St. Cloud has an aviation history that goes back to 1912, Kleis explained. That's when the first flight left Lake George, and landed in a cornfield just outside of town. "On the north side of town, we had Whitney Field, which served as the airport up until the early 1970s," Kleis said.

Last fall, the city of St. Cloud installed more than $1 million in sewer and water infrastructure at the airport, Myers said.

"We have the ability to build hangars, so if any of you want to build a hangar, now is the time," he added. "We are shovel-ready. We also have approximately $200,000 available from the local option sales tax, which will keep coming until 2038."

According to the Minnesota Department of Transportation's Office of Aeronautics, in 1948, St. Cloud received its first state airport grant and many more over the years, including study funding that served as the foundation for the new airport authority.

"We've been aviation partners with the residents of the St. Cloud region for nearly 75 years and we are looking forward to the next 75," MnDOT Aeronautics Director Cassandra Isackson told the Minnesota Flyer.