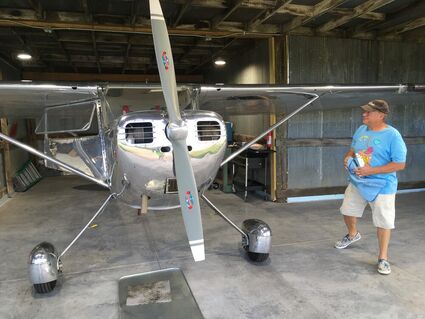 Ken Snyder inspects polish work on his Cessna 140A after a mid-September 2021 flight and return to the LeSueur Municipal Airport. His plane is stored in a renovated hangar that became a true do-it-yourself project.

Ken Snyder kept a simple mantra in mind throughout the course of his Le Sueur Municipal Airport hangar renovation project.

"My whole goal was keeping costs in check," he said. "It wasn't hard, even though a lot of thought went into it. If there was a question, I just overbuilt it." Snyder bought the 40-by-36 foot hangar in August 2020. The structure didn't have a door, the roof leaked, and two posts were rotten. The hangar also had a dirt floor. Getting a roof installed was a priority to protect Snyder's pristine 1950 Cessna 140A. Years ago, Snyder was heavily involved in general aviation

at Airlake Airport in Lakeville, where he had a huge hangar and restored many aircraft, mostly Cessnas. When Snyder's two sons were small, they shared his love of aviation, but as they grew older and became teenagers, they wanted to do other things, He sold his hangar and donated parts to the Stanton Airfield. When his sons grew up and moved out of state, it was time for an airport return. The hangar has been lots of fun to restore," he said, adding his wife, Amy, has been super supportive of the project, which was undertaken during the COVID-19 pandemic.

Snyder had previously purchased a supply of used pole barn steel. "We have a farm, and I had it stacked in a horse pasture," he said. That material was used on the roof. The next step was shoring up the two posts. "I basically sistered those in. The existing posts were rotten right at the ground level. There was nothing going into the ground anymore, just some holes," he said.

The door came next. Hi-Fold Door Corp. in River Falls, Wisconsin, provided a retrofit bi-fold door to replace the old sliding hangar door. "I just called Hi-Fold and got a price. Their bid was really good. It took them four to six weeks to build the door. The scariest part of the whole thing was making sure the measurements were right. I must have measured it about 10 times."

Snyder picked the door up with a neighbor's trailer and brought it home. He had to modify the structure of the hangar, including the rear tiebacks, converting them to 2-foot steel tube. "The door from Hi-Fold was really good. It was all pre-wired," Snyder said. "All I had to do was put a hot, neutral, and a ground wire in. I adjusted the lower and upper limit switch, and was ready."

Ken and Amy were able to use some of the leftover steel and insultation batts to complete the door just before the first snowfall of 2020. Replacing the hangar's dirt floor came next.

"The area to the west of the hangar would just fill up with water," Snyder said, adding that he needed to get the drainage right, so he cut into a sidehill and installed perforated drain tile that goes all the way around the hangar. "I filled it with pea gravel and made a retaining wall," he said.

Snyder really likes the size of the LeSueur hangar. "I haven't stopped working on it," he said. "It's all insulated, it's a basic T-hangar, with a 10-foot ceiling. It does angle back to about 8 ½ feet at the back. There was an old beam that hung down, and I could see that there were marks in it from people hitting their rudders on it." 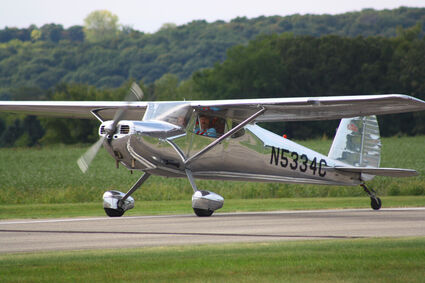 A 1950 Cessna 140A registered to Kenneth Snyder of Lonsdale, Minnesota, lands at the Le Sueur Municipal Airport the afternoon of Sept. 12, 2021.

Snyder also installed LED lights in the hangar and just finished installing an 80,000 BTU heater in late November. "You don't have to go big," he said, adding: "This project also keeps me from buying another plane. It's really been fantastic."