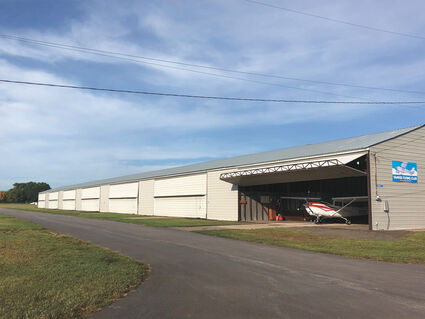 Wiley Properties does most of its renovation work in house, and has built special scaffolding to hold long sheets of door metal, Pictured is a total hangar renovation that was completed several years ago.

Wiley Properties got its start in 1954 with Hap Wiley, who owned and operated a well drilling company at the time. Since drilling is seasonal in Minnesota, Hap decided it would be beneficial to have his workers construct buildings during the winter months.

That activity eventually evolved into a successful family real estate business that continues to include a significant aviation component.

The company is currently owned and operated by Hap's son and daughter, Bruce and Barb, and Bruce's sons, Mike and RJ. Barb was recently induced into the Minnesota Aviation Hall of Fame.

"My grandfather was looking for a place to store his plane," said Vice President Mike Wiley. "He assumed there were other people out there looking for the same thing, and after he built his first hangar, he filled that one up, then he built another one, and before we knew it, the company had 113 units at Crystal. He was never one to do anything small."

Wiley Properties currently has 75 units at Crystal Airport. If a hangar is 40-plus years or older, it's going to need updates from time to time. Remodeling projects keep vacancy rates low.

"As the general aviation aircraft fleet ages, and new planes such as those produced by Cirrus Aircraft are delivered, people want to place those planes in nice hangars," Wiley said. "The days of dirt floors and manual doors are over."

About 10 years ago, Wiley said the company completed an extensive remodeling project on a building with 13 hangar units. Workers replaced all of the metal on the outside of the building, the doors, as well as the partitions between the spaces.

"We also added concrete pads and a driveway to the taxiway where there was old, broken asphalt." Wiley said. That building has remained occupied since that work was completed.

Wiley Properties does most of its renovation work in house, and has built special scaffolding to hold long sheets of door metal, Wiley said, adding: "You can't just do a 22-foot sheet off of an 8-foot scaffold. You'll start bending metal."

Hangar demand is always highest in the fall, Wiley said, adding he always seems to get a rush of leasing inquire calls in October and November, because people want to move to a new place before the snow falls or get their plane indoors before the white stuff really starts flying.

"I try to make the leasing process as simple as possible," Wiley said. "In the last year or so, I've been dealing with new pilots who are

getting into aviation for the first time. We work with a simple three-page lease, and I go over simple terms, insurance requirements, and Metropolitan Airports Commission requirements regarding storage. I try to make it as seamless as possible."

In 2017, Wiley Properties took down a couple of buildings at the Crystal Airport. Wiley said it wasn't financially feasible to maintain the old, smaller hangars.

"We took them down and decided to turn the land back to the MAC," he said. "Giving those spots back has spurred some new development at Crystal Airport. Having some new blood coming onto a MAC airport helps everyone out," he added.

The uptick in general aviation that's occurred in the last two years has been phenomenal, Wiley said. Plane prices are going up because of demand, and interest in aviation is increasing across the board.

"It's been really exciting," Wiley said. "There was a time when I had 35% vacancy at Crystal. That was after the 2008 recession when GA got hit really, really hard. Now, I'm down to a handful of available hangars, and it won't be long before I'm working off of a waiting list. It's probably two years out before someone can get a hangar."

Wiley said there's been a big demand for heated hangars in the last several years.

"A lot of that stems from the new avionics and glass cockpits that are going into airplanes," Wiley explained. "Pilots don't want to keep their planes ice-cold all winter long. We have one building that just had natural gas installed, and have a couple of heated hangars in it. This year, we've heated and insulated two more hangars. The demand for those is really high."