An American Stearman Spotted In The U.K.

Aircraft Formerly Based in Buffalo Flown By Actor Tom Cruise 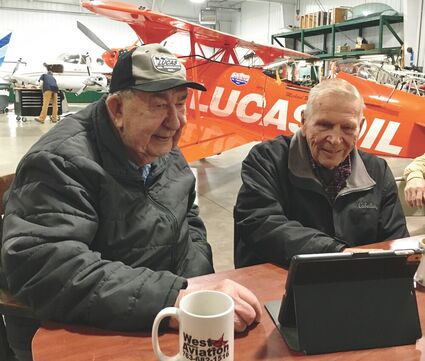 Don Tilus (left) shows Ray Johnson a video of Ray's Stearman being flown in the U.K. The video, available on YouTube, features actor Tom Cruise being checked out in the Stearman in preparation for his (and the Stearman's) role in Mission: Impossible 8.

Regular Minnesota Flyer readers may recall a promise to provide updates on the saga of a 1943 Boeing Stearman, previously owned by Ray Johnson.

Johnson had sold his beloved biplane to Paramount Productions and it departed Buffalo into a cold morning sky in March 2021, initially arriving in Florida but ultimately touching down in the United Kingdom as part of an upcoming movie production. (See "Buffalo-Based Boeing Stearman Leaves State" April 2021 issue.)

While not a condition of the sale, the destination and role of the Stearman was to be kept quiet for a time. That time has now elapsed,...