Airport Of The Month – Little Falls 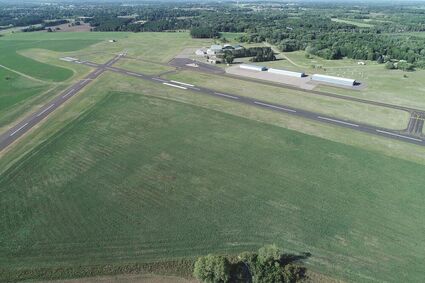 The new runway opened in August 2021 and replaced a turf runway of similar length and alignment.

Little Falls/Morrison County-Lindbergh Field is exactly what a General Aviation facility ought to be. Runway 13/31 is 4,000 feet long with all modern lighting systems and the customary RNAV approaches.

A well-appointed Arrival Departure Building is open 24/7 and fueling is available on the same schedule. Rental cars and taxis provide ground transportation.

After landing, the drive out of the airport is pretty cool. The entrance road is a tree-lined boulevard with a grass median. The icing on the cake is a crosswind runway that's 2,850 feet of brand-new asphalt pavement with state-of-the-art lights. To paraphrase the "Old Milwaukee" commercial, "It just doesn't get any better than this."

The new runway opened in August 2021 and replaced a turf runway of similar length and alignment.

Building new runways is not for impatient people, and the story of Runway 18/36 goes back almost 20 years when the need was first identified.

After that the city and county proceeded to jump through the required hoops.

An Airport Layout Plan (ALP) showing the new runway was prepared and approved. Then an Environmental Assessment (EA) was completed in 2012. After the EA was reviewed by all the agencies in the alphabet, a "Finding of No Significant Impact" (that's FONSI in government language) was issued.

A FONSI has to be revisited after five years if the project hasn't moved forward. That's what happened in Little Falls, so the EA was updated in 2017 and the FONSI was declared "still valid" by the airport gods.

The last step before construction was revising the Airport's zoning and buying some property. That was completed in 2019. Once the preliminaries are done, runway construction is usually interesting if slightly anticlimactic. At Little Falls, the main engineering challenge was grading the new runway where it intersected Runway 13/31.

That was accomplished by rebuilding part of the main runway and attendant parallel taxiway as part of the project.

To maintain the operations during construction the Runway 13 threshold was temporarily relocated allowing 2,700 feet for takeoff and landing.

The "jug handle turn-around" on the south end of the new runway is a unique design feature that greatly improves operational safety without the expense of a full parallel taxiway.

Naturally the airport at Little Falls is named "Lindbergh Field." If you're interested in aviation and visiting Little Falls, a trip to the Charles Lindbergh House and Museum is mandatory.

Operated by the Minnesota Historical Society, their collection includes memorabilia of Lindbergh's youth and his subsequent flying career. There are also two very interesting automobiles. Long-distance flying was what made Charles Lindbergh famous, but before and after his flying adventures he made some road trips of epic proportions.

In 1916 Charles drove from Little Falls to California with his dog, mother, and uncle. They used the family's brand new "Saxon Six." It was a modern automobile for the era, but mechanical limitations and poor roads limited their speed to 25 mph. The trip took 40 days. Like most of its contemporaries the Saxon had a gravity-feed fuel system. Steep grades in the west put the gas tank above the carburetor. Lindbergh solved the problem by backing up the big hills. The National Guard maintenance battalion at Camp Ripley restored the car and it looks brand new.

In 1959 Lindbergh was living in Paris and purchased a new Volkswagen Beetle. He could easily afford much more luxurious vehicles but chose the "People's Car." It took him to some exotic places including Beirut, Istanbul and Nairobi. Lindbergh slept more than 100 nights in the VW, a feat that required reversing the front passenger seat to accommodate his 6'3" frame.

In 1970 Lindbergh and the VW made their last journey from his home in Connecticut to Little Falls where he donated it to the museum. It was in excellent condition and the museum is preserving it just the way it arrived. 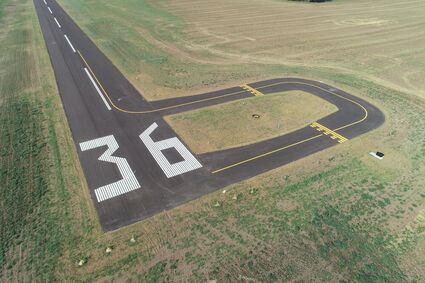 The "jug handle turn-around" on the south end of the new runway is a unique design feature that greatly improves operational safety without the expense of a full parallel taxiway.

You can forgo road trips to visit the museum, and fly to Lindbergh Field. With the new runway crosswinds won't be an issue.