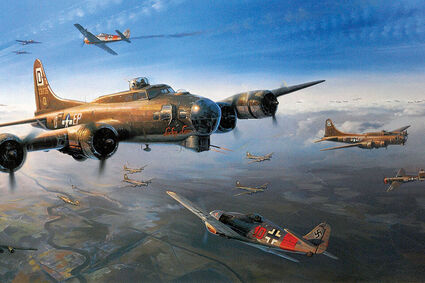 When Frank Valesh and his aircrew got to England the U.S. Army sent them to fly with a bomb group based at Thorpe-Abbotts. Known as the "Bloody Hundredth," the unit participated in a disastrous raid against German aircraft factories in Regensburg.

Frank Valesh had a career in military aviation that was brief, interesting, and frequently violent.

From September 1943 until August 1944 Valesh flew B-17s for the U.S. Army's Eighth Air Force in Great Britain. His bombers all had the same nose art featuring a human female with an impossibly exaggerated anatomy and the name "Hang the Expense."

Valesh was born in Graceville, Minnesota. In the middle of the "Roaring 20s" his family moved to a house on Dayton Avenue in St. Paul's Merriam Park.

His mother's maiden name was Burns, which explains why a family of Bohemians would live in a predo...