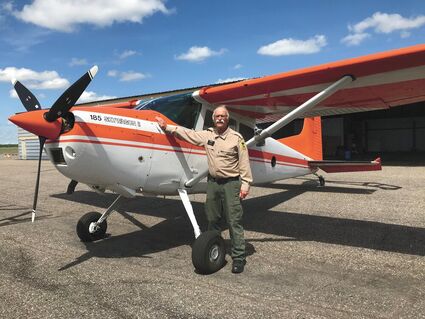 In 2002, John Heineman became a full-time Minnesota DNR pilot, eventually flying the MD-500 and Enstrom 480 helicopters in addition to this Cessna 185.

John Heineman retired from the Minnesota Department of Natural Resources Enforcement Division's Aviation Unit in early July. His next move was to go fishing. Since that outdoors season is when DNR pilots are busiest, Heineman's move from aircraft to boat was probably long overdue.

Heineman was the "go-to guy" within Minnesota DNR aviation. His most recent boss was Capt. Christopher Lofstuen who said, "We all strive to be like John."

Lofstuen also said supervising DNR pilots was "a lot like herding cats." That would make John Heineman the "top cat." Heineman and Lofstuen flew one last mission together for the DNR June 25 to survey more than 50 lakes around Duluth. Aviation is in John's blood, so maybe some more flying is possible once enough fishing gets done. His dad, Ray, was senior foreman for landing gear and wheels at the Northwest Airlines maintenance base in Minneapolis.

Heineman started flying in high school and soloed at the Lake Elmo Airport in a Cessna 152. He earned his Private Pilot's Certificate in 1970.

After high school, Heineman enlisted in the Minnesota Army National Guard in to fix aircraft like his father. He flew in UH-1s (the "Huey'') of Vietnam fame as a crew chief meanwhile going to college and working on his fixed wing ratings.

Heineman's other passion is stewardship of the planet. To that end, he acquired a forestry degree from the University of Minnesota while working on the flight line at the Anoka County-Blaine Airport in addition to his Guard duties. He earned fixed wing certificates and ratings including the precious Certified Flight Instructor.

Recognizing his talents, the National Guard sent him to train in helicopters at Fort Rucker, Alabama. Heineman was called to active duty for "Desert Storm" as a medivac helicopter pilot. He retired from the National Guard on New Year's Day 1998 as a Chief Warrant Officer 4. After college, Heineman went to work for the DNR, first doing woodland inventories in Grand Rapids before transferring to Bemidji in 1978 to become the district forester. He spent the rest of his career there, plus Bemidji Aviation provided him with a side job as a flight instructor and charter pilot.

In 1996 he joined the DNR's aviation unit, first as a "Forester/Pilot" flying the Bell OH-58 Kiowa (aka Jet Ranger) that had just come from the U.S. Army as surplus equipment.

The Kiowa was one of the types John had flown for the National Guard. In 2002, he became a full-time pilot, eventually flying the MD-500 and Enstrom 480 helicopters in addition to the Cessna 185 and American Champion Scouts that comprise the fixed wing fleet. The mechanical skills he acquired in the U.S. Army were handy, because Heineman was responsible for assuring the aircraft were properly maintained. He also used his instructor abilities to train other DNR pilots. 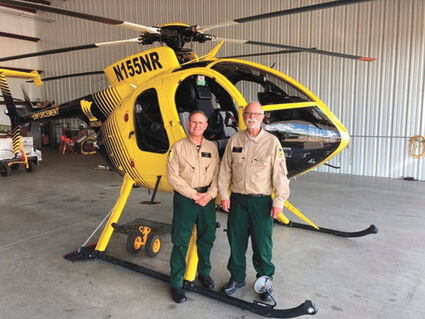 DNR Pilot Brad Maas and Heineman flew together almost four decades in the National Guard and with the DNR.

After 50-plus years in aviation and more than 13,000 hours flying, Heineman has plenty of stories to share. His favorite is about tracking moose one day when one of the animals equipped with a transmitter gave birth. He watched the whole process from his helicopter. "Flying for the DNR was the best job ever," Heineman said. "You have a lot of freedom in the job, and I never had a supervisor micromanaging me."

DNR Pilot Brad Maas and Heineman flew together almost four decades in the National Guard and with the DNR. After making one last flight with Maas in the MD-500, the most colorful thing Maas could say about Heineman was he hadn't made a lot of mistakes.

Since John Heineman's passions are flying and the great outdoors, he found the perfect career. To paraphrase the old beer commercial, "It just doesn't get any better than that."