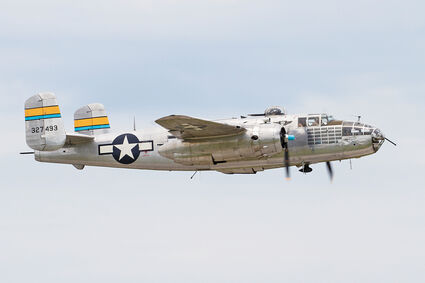 The Minnesota Wing attends airshows, parades, and other events throughout the year. "Miss Mitchell," the Wing's B-25J, is pictured during a flyover at this year's Duluth Air Show.

The Minnesota Wing formed at Fleming Field in South St. Paul as the first charter unit of the national headquarters wing, operating as a maintenance support arm.

"Miss Mitchell," the Wing's B-25J, left the anniversary party early to complete a fly-over mission to the Hinckley Corn and Clover Parade.

The event was entitle...