Airport of the Month-Runway Development 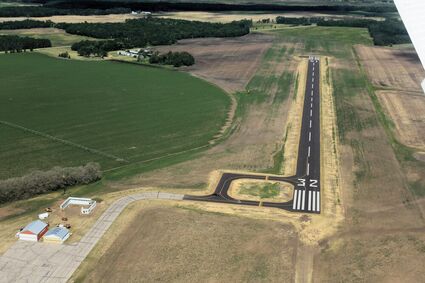 Recognizing the important role Fertile has in the state airport system, the Minnesota Department of Transportation has funded 95% of the cost to date of upgrading the airport.

Fertile Municipal Airport is built on the shore of one of the Earth's largest lakes. Unfortunately, the lake went away a few millennia ago.

Lake Agassiz was formed by melting glaciers and the famous Sand Hills around Fertile were once the beach.

That bit of geological history means the immediate neighborhood belies the name. Mostly oak savanna and prairie, the soil is not good for growing crops.

The Sand Hills do provide unique recreational activities and a spectacular natural area called the "Agassiz Environmental Learning Center" offers programs that "provide visitors with the opportunity to make connections to the natural world."

Fertile is a unique place. Forty-some years ago, a local flying club used 100 acres of leased land and a single turf runway for their operations.

Understanding the need for access to the aviation system, the city took responsibility and made it a municipal facility.

The runway was paved, and a lighting system installed that included Visual Approach Slope Indicators or VASI.

Various economic issues around the turn of the century resulted in a decline, but the city has taken the first steps in a major upgrade of its airport facility.

Stewardship of the planet is important in Fertile, so the runway project had some unique and environmentally friendly features. Existing and recycled materials were used to the maximum extent possible.

The old pavement and base course were reclaimed in place and the top two inches used to widen the base course.

Protection of surface and ground water was accomplished with "filter strips." The "strips" are 18-foot-wide, 5-foot-deep trenches located in the downstream 500-foot section of the ditches on either side of the runway.

The trenches are filled with aggregates to remove impurities and topped with turf to enhance transpiration.

Recognizing the important role Fertile has in the state airport system, the Minnesota Department of Transportation has funded 95% of the cost to date of upgrading the airport. 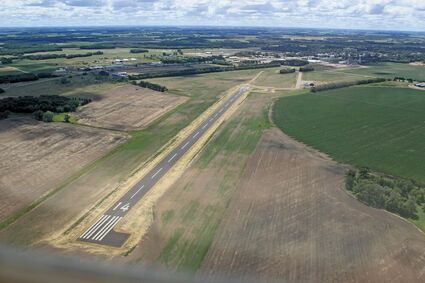 Various economic issues around the turn of the century resulted in a decline, but the city has taken the first steps in a major upgrade of its airport facility.

The budget currently stands at just over $1.6 million. The city and state are planning for more improvements. Future projects include reconfiguring and reconstructing the taxiway system.

Upgrading the aircraft parking apron and preparation of a formal hangar area with paved taxi lanes will be undertaken when funding is available.

Fertile is the perfect place for a fly-out breakfast or lunch. Downtown has some good eating places and is only ½ mile from the airport tiedowns. Underwing camping is permitted if you have too much fun and need to sleep it off. Fuel is available 24/7 allowing flexibility for departure times.

Growing crops might not happen right near town, but the area surrounding the Sand Hills is more typical for the Red River Valley of the North and very much agricultural. The city surely is successfully cultivating its airport.