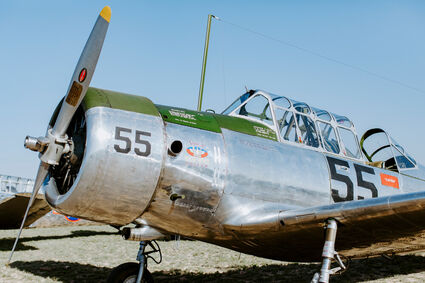 This BT-13 restored and donated in 2017 by Blaine-based American Aviation Heritage Foundation, Inc. participated in the reopening event in Sweetwater, Texas.

Minnesota's commitment to aviation history was well represented when the National WASP WWII Museum in Sweetwater, Texas, reopened in early May after completion of a significant renovation and expansion project.

Two Vultee BT-13s with state connections were among 12 aircraft present for a fly-in and homecoming event, which honored the first women in American history to fly military aircraft, paving the way for women to serve equally in the U.S. Air Force.

The Vultee was the basic trainer flown by most American pilots during WWII.

Granite Falls Fagen Fighters' BT-13 was flown to the event by...