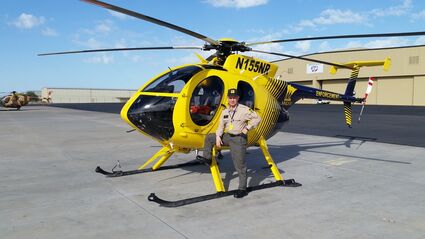 Brad Maas, who was a fishery technician for 31 years before transferring to aviation, is also an expert helicopter pilot. In April, he flew over 2,800 trout to a remote lake in Voyagers National Park. He's pictured with the department's MD-500.

Humans have been "stocking" fish for a couple millennia. Chinese palaces often featured ponds inhabited by ornamental fish and archaeological evidence suggests several Mediterranean civilizations were in the business of enhancing their fisheries before the Roman Empire took them over.

In the United States the practice of "planting" fish goes back to the colonial period. Early attempts were focused on sport fishing and involved mostly trout.

The bad news was hatchery raised fish were being released with little planning or consideration for ecology.