GMAG's Return Is A Terrific Success

The Seventh Annual Great Minnesota Aviation Gathering (GMAG) made a three-point landing with its May 21-22 return to Buffalo Municipal Airport (KCFE).

"We didn't have great conditions either morning, so a lot of planes could not fly in," Corfman added. "However, we did have a lot of people fly in on Saturday."

The West Metro Aviation ramp quickly filled with a variety of aircraft.

"We had people come in from as far away as Grand Rapids, Park Rapids, and Rochester, and even someone from Central Iowa," Corfman reported. "We also had someone from Pierre, South Dakota, and someone from Madison, Wisconsin."

This year's GMAG's program represented the strongest event slate yet, Corfman added. "AOPA's contribution in providing the Rusty Pilots Seminars demonstrates a long partnership they've had with the Minnesota Pilots Association, not only for the GMAGs, but for pilot education in general. They have supported us from Day 1."

Each year, the Minnesota Pilots Association has a key mission in serving GMAG exhibitors. And in terms of event programming, another goal is providing a breadth of coverage when it comes to general aviation.

"Once again, we hit the mark," he said. "We didn't have much exhibitor overlap, and when I walked around the exhibit hangar, everyone was happy with the turnout and the ability to talk directly with people. You could see it in their body language. Everyone was very relaxed." 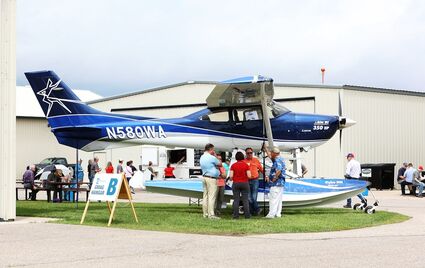 Each year, the Minnesota Pilots Association has a key mission in serving GMAG exhibitors. And in terms of event programming, another goal is providing a breadth of coverage when it comes to general aviation.

"The ability to recognize people in front of their families, you just could not have gotten that with a Zoom meeting," Corfman said, referring to general aviation's living with COVID-19 previous pandemic-imposed conditions. "The parents and families of the scholarship winners were there in person for the honors."

Corfman offered special thanks to Mike Wiskus and West Metro Aviation for donating hangar space for exhibitors and donuts and coffee, as well as Susie Brailler and Bruce Hoegger, who offered space for the Hangar Flying Sessions. The Friends of the Buffalo Airport also provided support, as well as EAA Chapter 878.

"We could not have pulled it off without contributions from these people," Corfman said, adding the next GMAG is scheduled for Friday and Saturday, May 13-14, 2022.