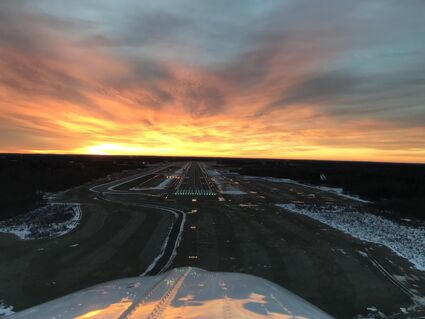 Working with a design team led by Short-Elliott-Hendrickson, Inc (SEH) a plan was developed to construct the new International Falls Airport facility in two parts.

Whatever the season, this area offers some of the best outdoor recreation in North America. Those who live there love it, and lots of people visit for a taste. The best way to get there is by flying to the "Falls International Airport," aka INL.

The airport is a joint venture between the city and county. Airline passengers arriving at the brand-new terminal building are greeted by a sign welcoming them to the "Ice Box of the Nation." About 17,000 passengers will pass under the sign in an average year. Not only is the new building beautiful, but also energy efficient and functional. Everything is on one level, so accessibility is not an issue.

The new jet bridge takes that theme all the way to the airplane and saves passengers a walk across the apron when the wind chill is minus 50 degrees.

The old building was OK when airliners had propellers, but jet service brought greater numbers of passengers per flight and the need for a larger waiting area. There was no TSA when the old building opened, and more space was also need for baggage handling.

Federal agencies including U.S. Customs and Border Protection use the facility and needed more space. The new building opened in May 2019 and even has a fireplace so visitors to the "ice box" can warm up.

None of the regular airline flights are international but the improved facility for U.S. Customs is especially important. Open your flight planning program and see where your Gulfstream will enter U.S. airspace on the way from Europe to the west coast. Then look at a trip from Asia to the eastern U.S. The intersection of those "Great Circle" routes will make an "X" which marks a spot awfully close to International Falls.

And, if your Gulfstream is out for maintenance this week, Falls International is also the perfect stop on a fishing trip to Ontario with the King Air.

Most business jets with international range need lots of runway. INL has one that measures 7,400 feet. A multi-year project is in progress to improve that pavement, but that will be another story. Other airports that are close to the "X," have long runways and customs.

Einarson Flying Service is what makes Falls Inter-national Airport special. Owned by Thor Einarson, this well-known aviation company offers a quick turnaround so international flights can clear customs, refuel, stock the pantry and be on their way.

Those services are available 24/7. By also managing the airport, Einarson's can assure incoming flights the runway is cleared and ready for use.

Airports are often managed by an FBO. What is very unusual about the arrangement between the International Falls/Koochiching County Airport Commission and Einarson Flying Service is 70-plus years of mutual benefit. In fact, the history of one is pretty much the story of the other. In 2011 the airport was named "Einarson Field" to memorialize that relationship.

Thor's father, Francis Einarson, was U.S. Army veteran who came back from World War II and learned to fly. Francis and his brother James started the business in 1948. At the time the airport had two paved runways that were constructed right after the ended, the longest being 3,000 feet. A terminal building was added, and scheduled airline service began in 1953.

Meanwhile the Einarsons were doing flight instruction, fixing airplanes, flying charters and air ambulance. It was mostly a small aircraft business and a popular one.

Francis Einarson might best be described as "entertaining." He was never at a loss for a story or some good philosophy. His skill, personality and knowledge made him well known in nationwide aviation circles and he was a 1998 Minnesota Aviation Hall of Fame inductee.

In 1994, Thor Einarson took over and successfully transitioned the family business to the 21st century. Thor is an accomplished pilot, but shifted the business focus to meeting the needs of transient aircraft and providing technical services. 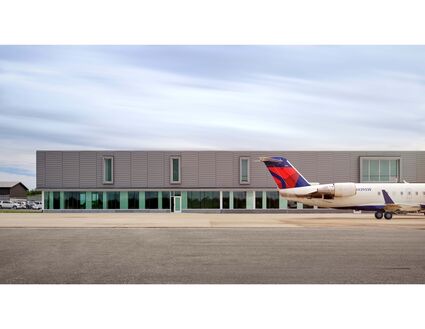 Airline passengers arriving at the brand-new terminal building are greeted by a sign welcoming them to the "Ice Box of the Nation."

Making good use of the climate, Einarson's is well known for doing cold weather testing of aircraft and components. Storytelling and philosophy remain available. Thor's every bit as entertaining as Francis, and he donates a percentage of all fuel sales to the Wounded Warrior Project.

Transitioning to the new terminal building taxed the company's airport management skills. To maximize the use of existing infrastructure, the new facility was built on the old site.

Working with a design team led by Short-Elliott-Hendrickson, Inc (SEH) a plan was developed to construct the new facility in two parts. Phase one was built next to the old building and had enough space to handle all the functions temporarily.

The old structure was then demolished and the new one completed. That it went so well is a tribute to both the design and construction team, but especially to Einarson's Flying Service.