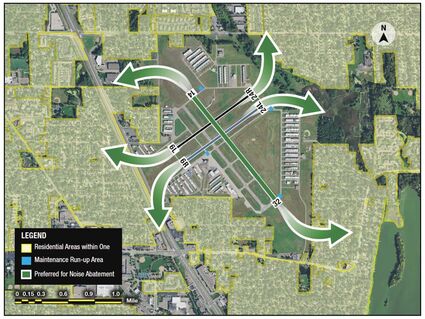 Laura Herrmann, FAASTeam representative from St. Bonifacius, hosted a mid-March webinar that featured the participation of approximately 20 to 25 pilots based at the Crystal Airport.

The goal was having a town hall similar to others conducted for the KCFM aviation community.

Crystal, which opened in 1948, is one of the Metropolitan Airport Commission's six general aviation airports.

It's a long-time popular hub for recreational, personal, and some business flying in the northwest metro area.

The 2020 improvements completed at Crystal align airfield infrastructure with existing and forecasted levels of activity at the airport.

The work is also enhancing safety for airport users by simplifying the layout of runways and taxiways.

Improvements include the lengthening of the main runway, 14L/32R, to 3,751 feet. The additional distance was obtained by converting blast pad pavement into usable runway pavement.

The turf runway, the last of its kind in the Twin Cities' metro area, remains on the airfield.

"The turf runway was shorted to about 1,700 feet," Wilson said. "That change was made so we could have approach holds on the runway and get rid of all the hotspots on the airport."

Previously, Crystal had eight hotspots; after the 2020 improvements were completed, the hotspots dropped to two, Wilson said.

"We are still working to get rid of those two," he said. "Our plan is to put an approach hold, so if the runway is not in use, the tower will not have to clear aircraft to cross it. We are still working on FAA approval for that. It's definitely in the works."

The 2020 changes also include addition of a service road on the south side of the field to allow vehicles to get around without crossing runways.

"It's not for general public use," Wilson said. "The ultimate goal is to have a similar service road on the airport's west side."

Wilson also addressed hangar site availability during his webinar presentation. "This is the first time in a number of years that we've had sites available at the airport. The north side of the field is capable of accommodating 20 to 25 hangars. We have plenty of lots available."

During his presentation, Olson said taxi instructions could be given via Golf to Runway 32. An aircraft could go into the Echo-1 run-up and exit to the runway without further instruction.

"The tower has to change what it has been doing in order to maintain positive control and give instructions to exit a movement area and reenter once a run-up is complete," he added.

If Crystal tower controllers observe a situation where intervention is required during a run-up, Olson said pilots should remain alert for a change in tower to aircraft communications.

"In the past, the first priority of air traffic was to provide safe and expeditious flow of traffic in the system," Olson said. "The most recent iterations in our rulebook call for preventing a collision of aircraft in system. We are going to use line-up and wait instructions more often."

Those instructions are the equivalent of the old "taxi into position and hold on Runway 32," he explained, adding the tower can't give a line-up and wait instruction to an aircraft if there is another aircraft inbound that has a landing clearance.

"Another restriction is that when we instruct an aircraft to line-up and wait, we have to advise that aircraft of the closest aircraft that's within 6 miles of the airport that's inbound and requesting a full-stop, a touch-and-go, or any other use of the runway," Olson said. 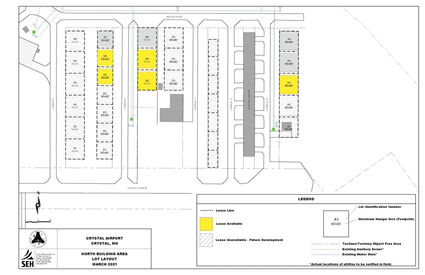 This graphic indicates lot layouts effective March 2021 within the North Building Area at the Crystal Airport.

And when certain situations exist in the Crystal control tower cab, line-up and wait can't be used. "If you expect to be put on the runway for departure and you are not, it's possibly because the controllers' configurations have been changed," Olson explained.