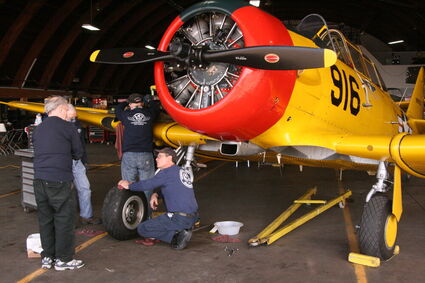 Hangar 3 at Fleming Field in South St. Paul was a busy place Saturday, April 17. Commemorative Air Force Minnesota Wing volunteers completed a photo session featuring Miss Mitchell, the Wing's B-25J while others were hard at work getting another North American product ready for a return to service after winter maintenance. Volunteers did brake work on the SNJ-6 Texan before Operations Officer Trevor Henson took off in the WWII-era trainer and flew a test flight. The CAF Minnesota Wing was the very first charter unit of the national headquarters wing of the Commemorative Air Force and operated as a maintenance support arm to help the CAF's mission and its ever-growing fleet of rare aircraft. The T-6 is known by several designations depending on the model and air force. The U.S. Army Air Corps (USAAC) and USAAF designated it as the AT-6, the U.S. Navy the SNJ, and British Commonwealth air forces the Harvard, the name by which it's best known outside the U.S. 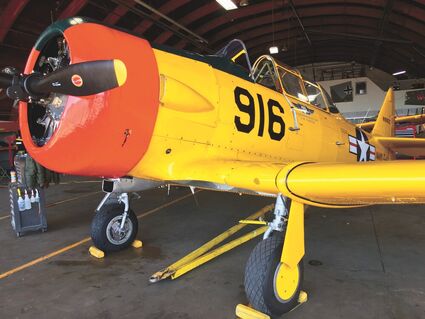 The T-6 is known by several designations depending on the model and air force. It's U.S. Navy designation is the SNJ.