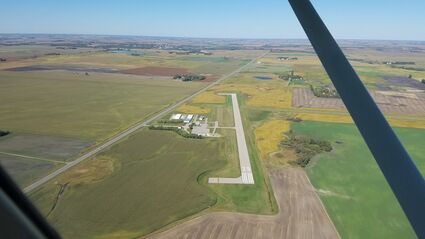 The first airport in Mahnomen opened in 1956 and was replaced at the current site in 1974. The "new" airport now has two runways and a spacious parking apron.

When Orville stepped off the Wright Flyer on Dec. 17, 1903, the first thing he said was, "Where's the bathroom?"

Well, maybe not. But once flights got longer toilets became a high priority after landing. When flight plans and IFR clearances were invented, a telephone became the second thing pilots needed.

Back in the "old days" rural airports often had an "out house" and a phone booth to fill the need. If phone booths are a mystery to you, think "Tardis."