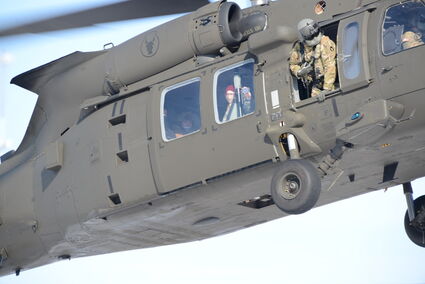 The joint effort was hosted by the Minnesota Army National Guard's 34th Expeditionary Combat Aviation Brigade based out of St. Paul and the Delano-based Skyhawk Composite Squadron of Minnesota's Civil Air Patrol Wing.

based out of Eden Prairie, and Hutchinson Composite Squadron.

The Minnesota National Guard offered not only the incredible opportunity for civilians to fly aboard an attack helicopter, but also presented CAP and community members with the chance to hear military stories and life lessons from soldiers who came to Brandt Airstrip in Delano to share their experience with anyone who was interested.

More than 600 spectators from surrounding communities in addition to CAP members and their families turned out for the aviation event.

The event received media coverage in three local newspapers in addition to earning photo coverage from the Star Tribune, the state's

After the event ended, Lt. Sundheim told cadets that he hoped seeing their hometowns from 2,000-3,000 feet, going 120 knots would inspire their passion and dedication to the mission.

He spoke about wanting cadets to commit to continue working hard and serving those around them, especially now that they'd just met people who were so, "committed that they came out in the cold snow to see these helicopters close up, then to watch them fly." 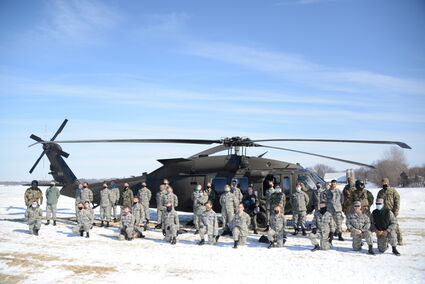 One of the guardsmen who helped facilitate the Blackhawk launch was the sponsoring unit's former operations officer, Maj. Chris Metzger, who also happens to be a proud CAP dad.

The major's son, Cadet Airman Cor Metzger, from Viking Composite Squadron, flew aboard one of the Blackhawks and described the experience as, "really fun and exciting."

Maj. Metzger told Minnesota Wing Public Affairs that these sort of events, "really unite people and help show them what's important - things like country and family." He went on to explain that those are motivating factors

that help veterans want to give back to their communities too, which was the case for the soldiers who helped with this event, all of whom were veterans of campaigns in Iraq and Afghanistan. The major also pointed out how many other family units were not only present, but present and flying in uniform. Some of these included the Rasmussen and Gregory families from Viking Squadron, in addition to Sundheim, who serves alongside his daughter, Cadet MSgt. Bridget Sundheim in the Skyhawk Squadron.