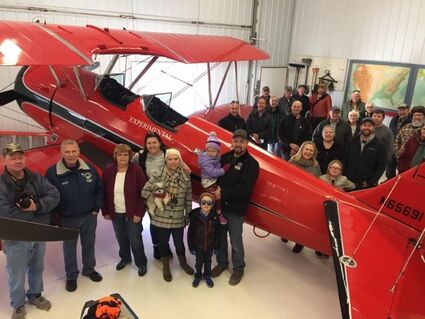 Family and friends gathered one last time in Ray Johnson's hangar around the 1943 Boeing Stearman before ferry pilot Jared Calvert flew the plane to Florida.

The sky over Buffalo this summer will be missing the sight and sound of a 450 hp Stearman biplane. The red with black trim airplane has been a familiar sight in the area for many years. But time marches on and things inevitably change.

It was piloted not by its long-time owner and restorer Ray Johnson, but by a ferry pilot who took advantage of relatively warm spring weather to begin the first leg of a journey to deliver the 1943 Stearman to a new owner.

Family and friends gathered with Ray to help him bid farewell to the airplane that had been such a large part of his life.

The Stearman circled, made a low pass back over the runway, and with a "wag" of the wings said goodbye to the fellow who had given it a new life.

In aviation we're always dealing with time. We evaluate how many logbook hours we have, how many hours are on the engine and airframe, and other details. And there's always a "next step."

We achieve our first pilot rating and then (perhaps) move on to advanced ratings.

We may even find a job that actually pays us to fly. We might "step up" from a basic aircraft to one that is faster or bigger or better suited to our needs. As time passes, there is always a next step. This is true in aviation as well as in life.

Ray purchased his Stearman as a very tired and worn agricultural spray plane, and then spent 20 years of part-time work bringing it into "better than new" condition. Over the next 20 years they were fixtures at fly-ins and other events.

In 2002, the Stearman was an award-winner at AirVenture Oshkosh and the National Stearman Fly-In in Galesburg, Illinois.

Ray and his Stearman were most recently featured on the cover of the November 2020 Minnesota Flyer, and in a report about the Mora fly-in. He loved being parked on the "front row" of a fly-in where everyone could see the Stearman, and he could talk to everyone about it.

But if there's anything Ray loved more than talking about this airplane, it was flying and giving rides.

An autograph book has the names of hundreds of riders. He shared that some of his favorites were the World War II veterans who had learned to fly in a Stearman, and he was proud to have preserved a bit of history for those early aviators to savor again.

Ray may be a romantic when it comes to his Stearman, but he also has a deep practical side. He described the decision to sell the Stearman as driven by recognition and acceptance of the challenges of caring for and maintaining such a large aircraft.

Ray realized the time had come to transfer the Stearman to someone who could continue to showcase the airplane, someone with the resources and a commitment to care for the airplane as he would.

And so it has come to pass that Stearman N65691 has left Minnesota to meet its new owner – Paramount Productions.

The destination of this delivery flight was Lakeland, Florida, and it arrived safely the next afternoon. Ray has been told that a first order of business will be to change the upper wing to one with ailerons, plus add an apparatus to allow a wingwalker to ride on the wing.

When these modifications are complete, Ray's Stearman (to those of us left behind in Minnesota, it will always be "Ray's Stearman") will be disassembled, loaded into a shipping container, and start a "next step" journey to the United Kingdom for a stint in the movie industry.

While the Stearman may no longer be under Ray's care, ownership by Paramount Productions fulfills his desire that the airplane's legacy will continue to be shared. 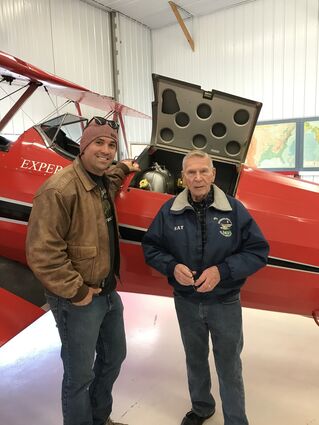 Just as the Stearman is now on a new life path, so also is Ray. Don't worry, he isn't going to be without an airplane or things to keep him busy in his hangar.

He still has a Cessna 180 which will soon be back on floats, there's the shell of an old Bonanza in a corner of his hangar, and much yet remains

for him to teach and share with the Minnesota aviation community.

Ray, thanks for generously sharing your Stearman with us for all those years.

Details about the Paramount movie and the role of Stearman are not yet available, but you can be assured Ray will closely follow the progression

Editor's Note: Wayne Flury is an aviation enthusiast, EAA Chapter 878 member, an occasional writer and air show announcer, AirVenture and Sun 'n Fun volunteer, and a Sonex aircraft builder who will likely be able to register his airplane as "vintage" by the time it's completed.