Frozen Forecast Leads to a Change in Florida Plans

In January, I wrote an article in which I laid out my flying plans for 2021. Fast forward just a few weeks and my, how things change.

The 12th of February was to be the eve of my first long cross-country trip. Not the type of cross country that you fly as a student, but my first real cross country – just my wife and I along with a suitcase in our Cessna 182 in search of sun, fun, and freedom in the skies.

Mother Nature had other plans.

About three days ahead of our anticipated departure date, Winter Storm Shirley found its way into our weather forecast and my expectation for warmer weather quickly dissipated. Temps were forecasted to be sub-zero during our two-day stop in Branson, below freezing when we hit New Orleans, and everything we would be landing and driving on was also now expected to be covered in a nice, fresh clean sheet of ice.

Weather problems aside, I had also recently become privy to the news that New Orleans had enacted extra-tight restrictions during the time we were slated to visit. The efforts, designed to shoo away potential Mardi Gras gatherings, prohibited all bars and restaurants from being open (including no takeout or delivery service), a ban on parking, street performers, and parades, and a city-wide curfew beginning at 7 p.m. each night. What fun!

With the hands on the clock ticking ever closer to departure time, we needed to review options.

Our only firm commitment during this trip was to be in Tampa, Florida, by Feb 20 to partake in a wedding. So, the option of picking a different destination in a safe direction of flight was off the table.

What about timing? I once again reviewed the forecast for the storm. In my original flight plan, I had buffered both ends of the trip with extra days to allow for weather. Unfortunately, this storm was predicted to not only spread from Minnesota to Texas, but was also bringing with it a cold snap that was expected to last for days. Even with the extra time I had budgeted, we would be pushing it.

Another alternative to consider was the possibility of skipping the first two stops and flying directly to Florida, where we could spend the week flying across the peninsula in search of white sandy beaches. While it looked like we could safely get as far as Nashville, the storm was large enough that it would prevent us from going any farther for a few days. We would still be spending half of our vacation staring at snow through a hotel window.

My mind searching for the next alternative, still trying to find the answer as to how to accomplish this trip, I went back to basics and took a step back to review the situation-at-large. Even if I did find a magic answer, we would be:

• Flying a 45-year-old airplane over long distances in sub-zero temperatures during a storm projected to be serious enough to knock power out across the country.

•Landing at unfamiliar airports in unfamiliar regions of the country that likely aren't well equipped or well versed in handling winter weather and ice like we are up North. Furthering that thought, would the local stores be open? If so, will there be anything left on the shelves? Would the hotel even have power?

•Points of intended landing were already expected to be closed to the public, rendering our experiences there to be limited at best.

•Working overtime already to wrap up big projects at work ahead of the trip, did I have time to start a new, last-minute flight plan from scratch? How many items would be overlooked in a rushed-together flight plan?

At best, we would very likely be spending the vast bulk of our "vacation" isolated in a hotel room looking out the window at the very winter weather we were seeking to escape while wondering if stores were going to stay open. At worst, well...

And so I now sit in the terminal at MSP awaiting a larger and faster airplane that will shoot us straight to the beaches of Fort Myers, writing about the decision to not fly (well, non-commercially, anyway).

While not as exciting as the idea of seeing the country from only a few thousand feet, choosing sand over snow was the wise option. There will be better days for cross-country flying this year and I will be even more excited to see the United States while she is in her full summer glory, not while she is being punched in the face by unruly weather. 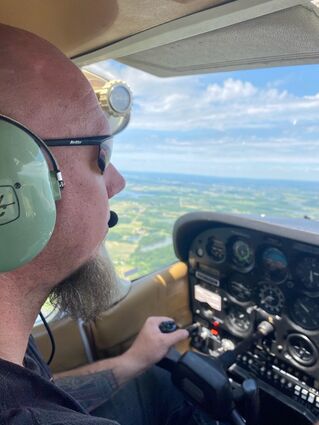