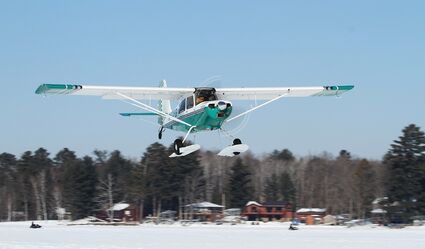 Bill Green makes a pass over Horseshoe Lake during the Sixth Annual TrickAir Fly-In in his American Champion Scout.

The fly-in season of 2021 got off to a rousing start with the Sixth Annual TrickAir Ski Plane Fly-In at Jackson Seaplane Base in McGregor. The event was postponed twice, pushing the date to Feb. 20. Low ceilings and a polar vortex hampered earlier efforts to hold the annual event.

The morning of the 20th brought blue skies and light winds making the hosts look "Nostradamus-like" in their selection of this day. In previous years, good weather meant lots of arrivals. The anticipation of many planes created some frantic, last-minute plowing to expand the parking area for wheeled planes.