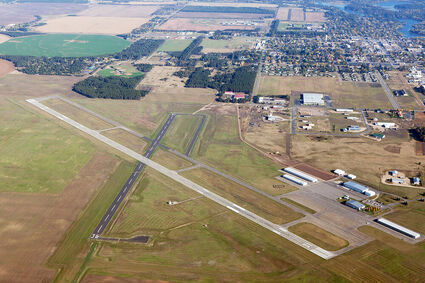 Different runways at the same airport can have different critical aircraft. At Park Rapids Runway 13/31 is designed for the Gulfstream, but Runway 18/36 is designed for a Beech King Air. The aircraft size also affects the dimensions or things like parking aprons.

"Blind luck will beat careful planning every time" might be a good theory for managing stuff like your finances. Thousands of authors have written millions of pages about financial planning, most of which isn't very helpful. Talking with "experts" is quicker but likely not much better. However, planning aviation facilities requires a more scientific approach.

Fortunately, the FAA has provided several hundred pages of succinct advice on how to plan airports. A few days of fascinating reading should make you an expert on the subject. Or maybe not. Advisory Circular 150/5070-6B provides detailed guidance on Airport Master Planning and Airport Layout Plans (or ALPs). It's good stuff, but not a "how to" book.

Airport planning can be a complex process for places like Minneapolis/St. Paul International or a relatively simple one for single runway General Aviation facilities. Someplace in between is Park Rapids Municipal Airport where they recently completed the long-term planning process. To gather public input Park Rapids formed a committee of airport users, community members and elected officials with Matt Zitzow of TKDA as the airport's consultant. The result is a comprehensive plan expressed in a book like "Master Plan" and graphically as an ALP.

To plan an airport properly, the biggest and fastest aircraft using (or forecast to use) the facilities on a regular basis is one of the first things to figure out. The "critical aircraft" determines how the airport is designed. There can be more than one. Park Rapids has two, the largest is a Category "D" (approach speed less than 166 knots) and Design Group III (Wingspan less than 118 feet) airplane weighing 93,000 pounds maximum. That neatly describes the Gulfstreams flown by Minnesota Mining and Manufacturing (3M). Company aircraft regularly visit Park Rapids bringing folks to their nearby corporate retreat.

Aircraft wingspan determines the width of runways and taxiways. Performance of the critical aircraft influences the runway length. Different runways at the same airport can have different critical aircraft. At Park Rapids Runway 13/31 is designed for the Gulfstream, but Runway 18/36 is designed for a Beech King Air. The aircraft size also affects the dimensions or things like parking aprons. Weight and landing gear configuration are considered in pavement design. Of course, this all needs to be consistent with applicable Minnesota rules and the objectives of the State Aviation System Plan.

A planning effort does not necessarily result in dramatic changes like a new or longer runway. Long-term users at Park Rapids have been consistent over the years, but economic growth is predicted to spur some needed improvements. Park Rapids and Hubbard County may well be the best recreation area in North America. The airport is close to Itasca Park and the Mississippi headwaters. The city is a regional economic center. Businesses at the airport do aircraft maintenance, painting, and avionics. Lots of people use the airport so increased demand for services and storage is predicted. The ALP depicts a major expansion of the building area.

Existing facilities at Park Rapids can handle 100% of the GA fleet. Runway 13/31 is 5500 feet long with top-of-the-line lighting and a MALSR on the 31 approach to go with the Instrument Landing System. Runway 18/36 is 3500 feet long, was paved in 2014 and has a full complement of lighting. The system of taxiways expedites movement between the runways and the spacious aircraft parking area. Obviously, this is a first-class airport, and the recent effort was not the first planning endeavor. Like previous improvement programs, David Konshok was a key participant. 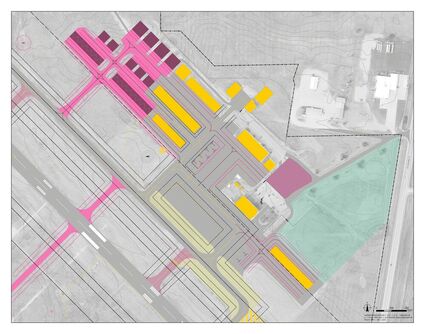 Konshok has been a member of the Park Rapids Airport Commission for an incredible 60 years. He promoted strong relations between the airport and community. His efforts helped secure state and federal support for aviation in Park Rapids. Konshok also found time to command the local Civil Air Patrol Squadron. In 2001, the city recognized his contribution by naming the airport "Konshok Field" and he was a 2013 inductee to the Minnesota Aviation Hall of Fame.

Lots of Minnesota airports have planning projects in progress. Park Rapids clearly shows the importance of user participation. If an airport you frequent is doing some planning, get involved! It's important!

My contention remains that financial planning is best done with an Ouija Board, but personal experience says investing in 3M is a good move. As a bonus, 3M knows how to use aviation effectively. Minnesota has many qualified consultants to help with airport planning. I can attest to the skills of Matt Zitzow. He learned from one of the best. That would be me.