Minnesota DNR's First Use Of Helicopters Has a Unique History 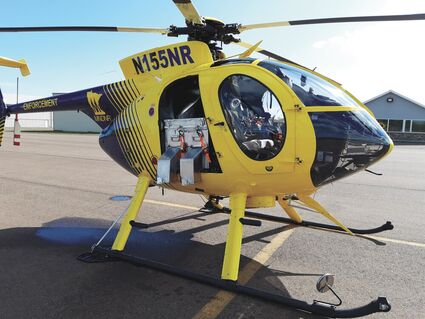 The Minnesota Department of Natural Resources' MD-500 with a tank for stocking fish.

If you can get past the fact that they have way too many moving parts, Helicopters are wonderful aircraft. Igor Sikorsky developed the first practical machine for the US Army called the R-4. About 400 were built and mostly used for medical evacuation during WWII.

Helicopter flying during the Korean conflict was made famous by the movie and TV series MASH featuring the Bell 47. That same type was used by a Los Angeles TV station in 1958 as the first "eye and the sky" and called the "Telecopter." Helicopters have been used in agricultural aviation, servicing offshore platforms and are now virtually universal in the TV news business. These very capable machines are useful for many things, but they really shine at natural resource management.

To military types the Bell 47 was the OH-13. In 1958 the Army was looking to replace it and Hughes Aircraft proposed the Model 269. It was rejected for combat, but in 1964 it was adopted as the Army's primary trainer and designated the TH-55. Almost 800 were manufactured. The TH-55 was replaced as a trainer by the Bell UH-1 (the "Huey" of Vietnam fame) about the time the Minnesota Department of Natural Resources decided they needed a rotor wing aircraft.

The DNR's first helicopter operation is the story of how two Vietnam veterans turned their "swords into plow shares."

Jerry Engelbrecht was the DNR's chief pilot at the time. He was a natural pilot who soloed at 16 and joined the DNR in 1972. As a U.S. Army pilot, Jerry trained in the TH-55 and flew over 1000 combat hours in "Cobra Gunships." After a brief stint as a game warden, he started flying for the DNR in 1973.

Engelbrecht could see that rotorcraft would be valuable for conservation work, so he arranged to acquire a surplus TH-55. Being the "Chief,"

he got to go to Fort Rucker, Alabama, and took the new aircraft apart for shipment to Minnesota. The aircraft was then assigned to Tim Petersen

Petersen was also appropriately qualified to fly the Hughes 269. In the late 60s the U.S. Army offered a "high school to flight school" deal to attract aviators. Never mind that flying helicopters in Vietnam was the most dangerous job on the planet. Tim wanted to fly, so he signed up and trained in the TH-55. Petersen flew 900 hours of combat in Southeast Asia, first in the "Huey" then OH-6 which was also a Hughes aircraft.

Tim Petersen loved the outdoors, and his father was a conservation officer. It seemed natural for him to join the DNR and he did so in 1972 as a warden. For 10 years he was a "ground pounder" but used that time to get fixed wing ratings on the GI Bill before transferring to aviation. Petersen was flying a Cessna 185 from Bemidji when the DNR acquired the Hughes and was happy to go back to flying rotorcraft.

Engelbrecht, Petersen and the 269 made the helicopter an essential part of DNR aviation. They developed most of the techniques and procedures used by the department, but not without some risks. Peterson and a biologist where surveying Sandhill Crane nesting areas when the fuel system failed, and the engine stopped. It was Petersen's second engine failure in the 269. He successfully landed from an autorotation both times but in the second incident there was nothing but woods below him and the helicopter was a total. It was replaced by a Robinson 22 which Petersen flew until he retired in 1993.

The Hughes and Robinson helicopters proved useful, but both were slow and small. The Model 269 had only two seats, 180 HP and a cruise speed of 80 MPH. The useful load was about 550 pounds making two people and full fuel about all it could lift. The Robinson was not much better. Something more capable was needed. 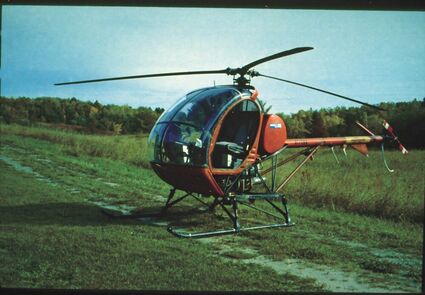 The TH-55 was the Minnesota DNR's first helicopter. In 1964, this helicopter was adopted as the U.S. Army's primary trainer.

In 1996 the DNR acquired two Bell OH-58s, to civilians the Model 206 "Jet Ranger." Compared to the Hughes, the Bell helicopter had three times the useful load, twice the seating, and a 50% increase in cruise speed. Plus, the engine was a much more reliable turbine. Two non-flyable OH-58s came with the deal for spare parts.

One of the Jet Rangers is still part of the DNR rotor wing fleet. In 2006 an Enstrom 480 was added, and the flagship MD-500 was acquired in 2015. The Enstrom can be outfitted with a specialized spray rig for dealing with invasive plants and a fish tank can be fitted to the MD-500 for stocking in remote areas. "Bambi Buckets" are sometimes used to help with firefighting.

At some point the Army started to name helicopters after Native American groups. The OH-13, TH-55 and OH-58 were Sioux, Osage, and Kiowa. Universally known as the "HUEY" the UH-1 was officially "Iroquois." The Army called the OH-6 Cayuse, but it was commonly referred to as a "Loach" (light observation helicopter) and is the ancestor of the MD-500.