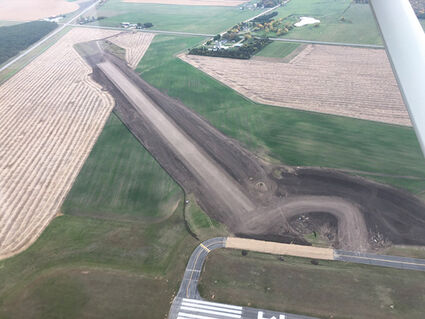 "Aerial of the new turf runway at Wadena Municipal Airport. It will be green next summer."

Lots of general aviation airports have only one runway. Some have two, and a few busy ones near urban areas might have three or even four. In many cases, the runway configuration is historic. Airports developed in the 1940s generally tried to come close to the three-runway configuration idealized by military bases built during World War II. The runways formed a triangle, assuring that aircraft could always take off and land into the wind or nearly so.

Wadena's original airport came close to the ideal. It had two turf runways so crosswinds weren't much of an issue. However, expansion of th...