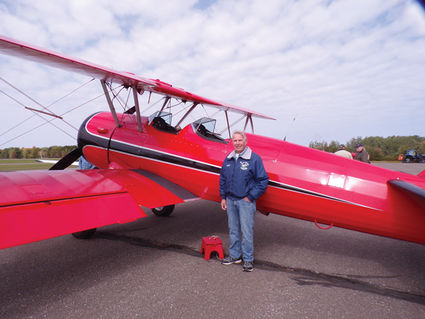 Ray Johnson and his 1943 Stearman.

The city of Mora hosted its annual fly-in Saturday, Sept. 19 from 8 a.m. until noon at the Mora Municipal Airport. The day began with the Mora American Legion opening ceremony with the presentation of colors followed by the Mora Lions Club serving a pancake breakfast with all proceeds going to support community projects and donations. Volunteers were standing by to greet all incoming aircraft with a poker chip for a free breakfast for all pilots in command. There were airplane rides available, a paper airplane contest and a free gift for the kids and a few skydivers dropped in to surprise everyone. Besides having as many as 50 + plus airplanes coming and going and on display there were also many tractors and the city's maintenance equipment to check out.

Airport Manager Joe Kohlgraf was on hand to talk about the hopes for future expansion of hangar space. He said "Almost all of our hangars are privately owned, only a few belong to the city, pilots want to come here, they want to have a hangar here but they end up going elsewhere due to a shortage of available space." Currently hangar owners have to enter a lease agreement with the city and to get more space a master plan has to be approved by the city of Mora, the Federal Aviation Administration and the Minnesota Department of Transportation. Kohlgraf was excited about the great turnout, the weather was perfect and it was the best attendance he had seen in the last three years.

Hawk Aviation was available for airplane rides and they were busy all morning. Owner Mark Nelson was there to oversee the rides. They had two Cessna 172s from their school being used for rides. Hawk Aviation flight school has been based in Rush City since 1999. They have seven instructors the two Cessna planes and a Beechcraft Duchess they lease for multi engine certification. They offer everything from ground school, private pilot license, instrument rating to multi engine rating. Nelson said "We have a good enjoyable group of instructors available to teach you how to fly, whether you want to fly for the airlines or other career or just want to fly for fun." He was happy to see so many people out flying because there just hasn't been a lot of excitement to get out and fly lately due to the pandemic.

Ray Johnson flew in from Buffalo with his 1943 Stearman. He has had it for 40 years, he spent the first 20 years rebuilding it, he has over $100,000.00 into it plus labor. It has a 450 horse power engine and he has given more than 1000 rides in it. He enjoys the open cockpit and loves to talk about the history of this plane as it was this type of plane that was used to train at least 70% of the pilots in World War II. He also mentioned that in 1956 he had his first solo flight out of the Mora Airport under the guidance of his flight instructor Sid Frietag. Johnson worked as a corporate pilot flying out of Crystal Airport and also holds an airframe and power plant license.

Marlon Gunderson from Lake Elmo flew in with his experimental aircraft called a Cozy III because it will tightly fit three people in the cockpit. It is built from plans not a kit and when he bought it, it was close to being finished but he put four years into it. It was designed by Nat Puffer who based it on the Long-EZ design by Burt Rutan, which is a two person design. When parked the Cozy III nose sits on the ground as the center of gravity is over the rear wheelbase and the plane would tip over when empty. The plane works on a "canard" system similar to the Wright brother's plane as it has a small flight wing in front of the cockpit, it also pushes the plane with a propeller in the back instead of pulling from the front. It is made from fiberglass, it is streamlined, smooth easy flying, fast, efficient and it flies at 180 miles per hour. It drew a lot of admirers in Mora especially when he took off. 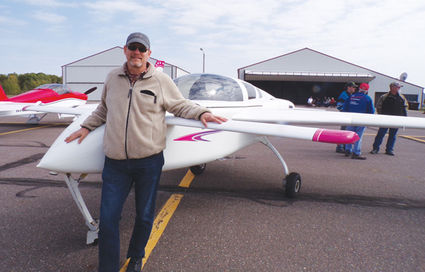 Marlon Gunderson with the Cozy III.

Kent Bosch and his wife Janet from Montevideo stopped by in his 1948 Navion. Kent volunteers with Lifeline Pilots, a charity flying organization out of Peoria, Illinois. They put pilots together with medical facilities to take people who may need a medical procedure and cannot take the time to drive. He will pick up a patient at a rural airport and bring them to Rochester so they can get to the Mayo Clinic for an organ transplant. This spring he picked up a veteran in South St. Paul and flew him 400 miles to northern Chicago then another pilot took him to Pittsburgh for a kidney transplant. Sometimes it is for routine cancer treatment and the person can't fly commercial because their immune system is compromised or they can't sit in a car that long, many have never been in a plane before. They stopped by on their way to Isle to go for a bike ride on the Sioux Line Trail. He had never been to either airport and was impressed by the facility here. He went to Isle to support another small airport as the city there was trying to close it and a group of pilots fought to keep it open.

Many people commented on the nice facility and the amenities offered at the Mora Airport, from the tar runway, the fuel service, courtesy car and of course the friendly people. For several it was the first time they had flown into this airport and said they would love to come back and see more of the town.