A New Mission for a New Normal 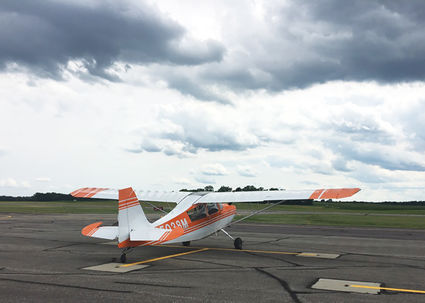 Last summer, the first I spent with a private pilot's license, I used my newfound freedom to hit up a number of Minnesota fly-in events: Rush City, Starbuck, Elbow Lake, Aitkin, etc. I even made my first trip to Oshkosh and camped for a few days. Naturally, this year I had hoped to do the same, now a year older and a few certificates smarter, but I think by this point we're all aware of how that plan turned out.

Part of what I love about fly-in events is that they provide a mission, a reason to get up and go fly somewhere. They give us purpose; there's nothing worse than a beautiful day for flying and not really having anywhere to fly to. I'm not the most creative person, but I do get bored easily, so I had to find some missions for myself in a world full of pandemic restrictions and utterly empty of social gatherings.

I've been working on the Fly MN Airports Passport Program, so that's been good for about 30 different airports so far this year. I have a friend in South Dakota and another in Iowa that make for good 90-minute flights one-way. I've seen others flying seaplanes to their cabins, taking friends or friends' kids up for flights, and diving back into flight training for new certificates and ratings. As airport restaurants closed, regrouped, and reopened, we've all been back to breakfast, lunch, and dinner trips. Some flying activities look the same as they always have, while others are altered or non-existent.

We learn in primary flight training that resilience is a quality pilots need. Once the wheels leave the ground on your first solo, you no longer have the option to back out-one way or another, you have to land the plane. As the pandemic drags on and the world remains in flux, both our collective and individual resilience continues to be tested. It's hard to say what the next day will bring, much less the next week or month.

I know that reality makes me uneasy, and it saps at my motivation to pull the plane out and go anywhere. But anytime I talk to anyone with a similar lethargy, I'm the first to say, "Just do it, just go fly," which tells me I need to take my own advice. It's easy to come up with a thousand excuses not to go flying-too many things to do, too little time to do them in, nowhere important to get to. But maybe the important thing right now isn't to go somewhere specifically, but rather just to go. Go do three takeoffs and landings for currency. Go fly to an airport you've never been to, just because it's there. Take someone flying who's never been in a small airplane before. Find a reason to say yes instead of no. The new mission isn't a destination, it's a process.