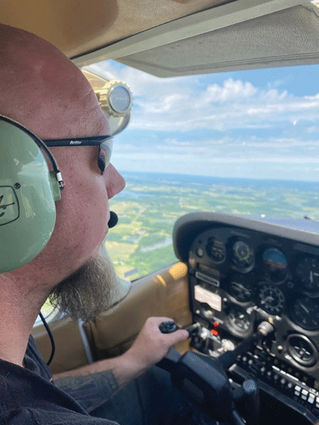 Riding my motorcycle to Buffalo Municipal Airport (KCFE), I took in a few deep breaths of fresh country air while basking in the rays of the warm summer sun. The smooth, steady rhythm of the motorcycle's engine provides the perfect drumbeat to the tranquil landscape, singing its song to the backdrop of farmsteads and forestry that decorate my surroundings. Even from the ground, June in Minnesota today is as picturesque as ever and would surely give Vincent Van Gogh a run for his money.

The airport is at the east edge of town, just past Norm's Wayside – a greasy-spoon joint with excellent food, complete with a metal sculpture garden outside called Normassic Park. Slowing down as I pass the metal dinosaur welcoming you to Norm's, I turn into the airport and study the wind sock. Looks like we will be taking off on runway 36 today.

Today's mission is simple: dinner. My wife works as a hairstylist in Buffalo, and her shift ends at 2:00 p.m. The plan is for her to meet me at the airplane and we will make our way northeast for a quick stop at Two Harbors before eventually heading to Duluth. The stop at Two Harbors will give us an opportunity to overfly the Duluth harbor instead of descending into it, and hopefully get a spectacular view of Lake Superior while also giving us a chance to sneak in a quick visit to our favorite town on the north shore.

Having been stuck home since late March with COVID restrictions, flying has been one of the few precious escapes that I have used to pass the time. With less commercial traffic in the sky and plenty of free time, flying has proven to be the perfect social distancing activity – so long as one can remain six feet away from the airplane in front of them......

The hangar door rises, voicing its complaint with creaks and groans. When the complaining stops, I pull on the towbar attached to the Cessna's nosewheel and the sun welcomes her onto the ramp. She's not the newest bird out there, nor the fastest, but she's mine. And today, dressed in a new coat of gloss white and race red, she looks eager to fly.

A quart of oil during preflight and tanks topped with fresh 100LL, and my wife arrives right on time. We strap in, crank the engine, and after a successful run-up I advance the throttle and the wheels begin to roll faster as we accelerate down the asphalt runway. Gentle back pressure at Vr, and the wings bite the air. We climb into the sky and the miracle happens again - I never tire of the sheer joy in experiencing the magic of flight – the impossible dream that so many generations of mankind had tried and failed to achieve, until two brothers in North Carolina changed the world.

Turning course for Two Harbors, we climb through a scattered layer of clouds that will accompany us for about half the trip. Weaving around the big white billows to maintain VFR separation in the climb feels like a dance with mother nature. At 7,500 MSL we are above the clouds and I find myself once again swooned by the sound of a throbbing engine while my wife and I make small talk about her day.

Lake Superior grows on the horizon and I begin a descent to bring us closer to the harbor city so my wife can snap a few photos as we cross over and fly up the north shore. Having been to Duluth several times but not having flown there, I have often stood in awe at the size of the cranes, silos, and ships – anybody who has personally witnessed the S.S. William A. Irvin, a freighter that now serves as a museum, can attest to its neck-snapping height – and now I'm amazed at how small even these large objects are from the sky above.

We fly up the shore and get the AWOS at Richard B. Helgeson airport in Two Harbors. A beautifully well-maintained airport in a stunningly gorgeous part of Minnesota, Helgeson airport boasts a 4,400' asphalt runway and a 2,580' turf runway nestled within Superior National Forest. Wind is blowing down the length of the shoreline, and we select Runway 6. The swirling air mass above the trees provide enough bumps to keep us entertained on final and I make a fair landing, flared a smidge too high but salvageable.

We tie down and head for the A/D building to obtain the keys to the courtesy car, a retired brown Police Interceptor with all of the fun equipment removed. For those that haven't been, Two Harbors is a small town of about 3,500 people that sits about 30 miles up the north shore of Lake Superior from Duluth. A cozy lakeside setting, the town is a combination of two separate communities - Agate Bay and Burlington, which were merged when the Minnesota Iron Company chose the location as a terminal for the Iron Range Railroad. Also the town in which 3M was founded, Two Harbors is now built for tourism with a park on the lakefront, antique shops, and a brewery for anybody not flying in the next eight hours.

After spending an hour in town, we head back to the airport and are soon climbing back out above Superior National Forest. Heading back down the coast at 2,000' AGL, our next stop is Richard I. Bong airport in Superior, Wisconsin. Winds are favoring Runway 4, but are stiff; 14 knots gusting to 24. A large gust catches us as I pull the throttle to idle over the runway threshold, and we balloon. Dangit! Thankfully with 5,100 feet of runway, I have plenty of room to spare and the rest of the landing was uneventful.

We taxi to the ramp and as we are securing the airplane, my wife looks up, squints, and lets out a "What's that?"

Lifting my head, I see a large black aircraft in the corner of the ramp. "PBY," I said as I studied the large boat-turned-bird, "That's our daughter's favorite airplane." Indeed, pictures and drawings of the PBY Catalina are scattered about the walls of her bedroom and she has always wanted to see one in person. Too bad she's not here.

A head sporting a grin and wearing a CAF baseball cap pokes around the corner of the hanger in front of us, and speaks up: "Want to see another one? Come on in!" We round the corner into the open hangar and see another PBY, this one smoke gray and light blue, jacked up on stands. The wings rest in cradles off to the side, next to a nearly complete Stinson L-5. Cool!

Taking advantage of my wife's patience, I chat with the mechanic as he goes into detail talking about the restoration that is taking place on the PBY. Work had started several years ago, and the airplane was actually moved from Duluth to Superior in 2018, they are still working on the airframe and fundraising for the engines. "$128,000 is what we need for the engines. A lot of money, but the donations will come in." I hope so.

After taking a few pictures and sharing a few more words with the mechanic, I can sense that my wife's patience has expired and ask if I can borrow the airport courtesy car. "Unfortunately, it drove off just as you taxied in," came the reply from the frowning mechanic, "But you can call a taxi."

We call a cab and wait. Named after the famous WWII ace born in the city of Superior, the airport features a large A/D building with a full-length mural Major Bong standing in front of his P-38 "Marge." I have wanted to visit this airport for a while and spend my time reading the historical news articles hung on the walls while we wait for the cab.

The cab takes us into town and my wife and I each enjoy a salmon burger at Fitgers. The fish is tender and the sweet potato fries provide perfect accompaniment. If you have not been there, I highly recommend both the burger and the restaurant. Mission finally accomplished, we hitch a cab back to the airport and the hangar is closed. A turn of the key after preflight, and the engine catches. We are off again!

I had timed the afternoon's events around sunset, and set VETZZ as a waypoint in the airplane's GPS. VETZZ overlies Lake Mille Lacs and I was certain it would provide a romantically picturesque view of the sunset over water, and the payoff was just as I had hoped – the view was spectacular. Lakes and forest spanned the view of the earth below, the sun was starting to settle just over the water, and the moment was approaching its zenith! Just then, my wife's voice rang across the intercom. Nature calls! A perfectly planned moment, and... ahh, the best laid plans of mice and men often go awry... Robert Burns said it better than I ever could.

Scanning the sectional, Mora is the nearest airport. We hang a left and as the sun sets my eyes are now instead focused on the lights surrounding runway 17 at KJMR. A consolation prize, it is a week from Independence Day and the fireworks are in full force over Knife Lake, and we pass over them as we descend. Watching the bursts reflect off the surface of the water, I decide fireworks are just as fun to view from above as they are from below.

A few minutes later with bladders empty and wing tanks full, we climb out of Mora into the darkening sky. The city lights reflect off of the bottom of the wing and I am once again rendered speechless on the beauty of flight. Why more people don't do this, experience this feeling, witness these incredible sights, I don't know. I resolve then and there to take more people flying.

The sky growing pitch black, we decide to shoot a touch and go at St. Cloud Regional just for kicks, and follow the city lights of Becker and Monticello back home to KCFE and grease the wheels onto the pavement. The perfect way to finish a spectacular trip, a good landing always makes me smile from ear to ear.

My wife wraps the evening up with a hug and a kiss, and hops in her vehicle. As the tail lights of the Jeep fade, I push the airplane back into the hangar, wipe the bugs off and close the door, smiling and replaying the trip in my mind, and thinking...

Today was a good day to fly. 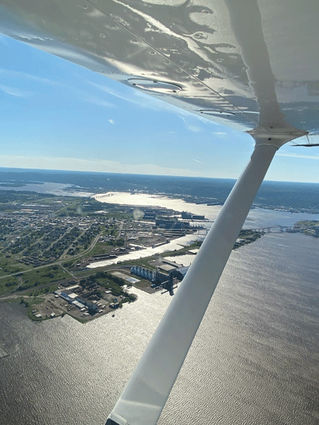