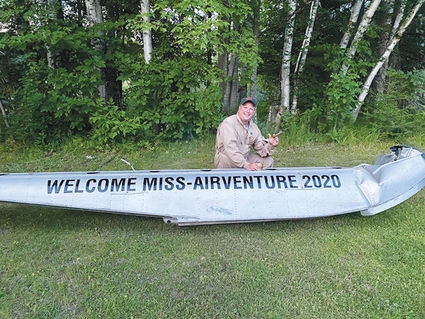 Paul Jackson carrying on the tradition on "Flight suit Friday".

Paul Jackson of Eden Prairie sent in this story about a "splash" held in lieu of AirVenture.

What do you do when a pandemic wipes out the most popular flying event in the world that just happens to happen one state away? You improvise and make sure you have a great time and make sure your buddies are safe and comfortable with the event.

I talked to some friends about what we should do when AirVenture 2020 was canceled. My winter ski plane fly-in has become a bit of a tradition after five short years so I was nominated to host an event of some form or function.

Months of lock down and social distancing led our pilot group to be cautious, but in need and wanting to get out and about. With no disrespect to our neighbors to the east decision to cancel their event, we decided to have our own AirVenture. After a few calls and texts Miss-AirVenture was the chosen name and I started the process of organizing the event.

In COVID-19 times outdoor events in Minnesota are limited to 50 people per our governor. I will not get into politics and the level of agreement I and many others have with this limit for an outdoor event, but with some "encouragement" from my wife I decided compliance was the best plan. I also happen to operate a private seaplane base that has limited parking so splash-in guests would be kept to a small number, but I could still mutter under my breath about the black helicopters they would deploy if 51 people happened to show up to my seaplane base.

Invites were first sent out to my Oshkosh attendee group, which is based on my St. Cloud State Alum friends who I first attended the show with in 1986. Most of the regulars were in and they came from as far as Seattle and as close as Ely and St. Cloud. They pre-ordered souvenir shirts and claimed the single 50-amp site I have at the base. To add to this group, I invited float plane friends and a couple of General Aviation guys from the airline that I fly at. All in we looked to be about 50 or so.

My ski-plane fly-in ill prepared me for the logistics of campers, multiple floats planes needing mooring balls, parking spots, and overnight guests. It is much easier to host a fly-in when it is -5 degrees and it gets dark at 4:30 apparently. Working my network I reserved catering from the nearby Horseshoe Inn (great place to splash into or land on skis and grab dinner just north of my base). Trent, the head chef, promised brisket, cowboy beans, and potatoes for my best guess of 50 souls. I found a corn roaster and bags of corn which were scheduled for duty at the now canceled MN State Fair to simulate the Seaplane Corn Feed (200 ears an hour capable seemed about right as enough for a crowd of 49). My wife helped me discover the miracle of mass produce at Costco that resulted in watermelons aplenty to emulate the watermelon social at the Seaplane Base at the show. With the hiring of a food truck for Saturday night I had the food bracketed, or so I thought.

I arrived mid-week at the base to greet the mosquito patrol guy my wife had hired to fumigate the area. He seemed happy and content (he had Colorado plates so I was suspect) and promised me there would be no 3-eyed eagles in the area next spring and that the stuff worked. A float plane friend showed early with a big tent and tables he secured through some arm twisting. We soon had a nice eating spot with shade, the corn roaster was set up and the drive in movie set arrived. When the truck with the port-a-potty arrived, I knew we were going big.

Thursday night brought the first ground pounder arrivals and we accomplished our goal that night of getting the Grand Finale out of the way to take the pressure off the weekend. Going big the first night is unfortunately a common error of our group (34 years and we keep repeating the mistake). At least the snowmobile trail grooming should be good this year since we donated several hundred dollars through pull tabs at the local bar that seemed to never have a red line anywhere on them.

Friday arrived hot and humid. Flying that morning was good, but bumpy, and I had a good look at the trees at the end of the lake with my 180 in that thick, hot air. My passengers thought it was part of the ride, but it convinced me I am 60 HP and a Scimitar prop away from Eutopia. If I hadn't put so much money in pull tabs and that port-a-potty I could afford that P-Ponk conversion (yes, I know it's a Northland conversion now but until they offer me a discount I will call it a P-Ponk).

By Happy Hour on Friday we had several seaplanes on site and we were all convinced it was too hot to fly and that the watermelon social should take place post haste. We were joined by several who flew those funny planes with only wheels on them into the nearby airport and just like the night before we were on our way to another Grand Finale.

Dinner was great and held hours before it is even thought about at fish camp in Canada. I believe bringing the wives with was having a positive effect on our meal planning and execution. It is an Oshkosh tradition (mine alone actually) to don a flight suit on Friday's. The 85° temp and 70° dew point made me one of only a few to carry on the tradition, but hey who doesn't look good in a bag even with sweat rings?

Friday culminated with a Top Gun trivia contest between a former F-14 guy and my son via Zoom who is in pilot training with the Navy in Pensacola and a screening of Top Gun on our inflatable screen. I led the heckling of the Navy guys in the bar with their sunglasses on much to the embarrassment of my wife (who didn't seem to think that wearing the flight suit I bought her at Oshkosh a couple years back was really all that important).

Saturday arrived with rain showers, but most of the convective stuff missed us and the early afternoon brought several more transient arrivals on day trips. My wife provided sloppy joe's and hot dogs for lunch for the large group that had gathered. I did a quick head count and peered to the skies fearing the emergence of black helicopters when my guestimate came close to 50 on site. Truly though, the group was doing a great job of social distancing and respecting each other.

The rest of the day was spent socializing and watching aircraft splash and go on the lake. Happy Hour was such a hit the day before we moved it up a few hours on Saturday.

A call from my food truck guy caused a bit of a logistical stir when he had to cancel a few hours out due to a family emergency. My wife stepped up and the team of many coddled together leftovers and fired up the corn roaster for the Saturday dinner. Everyone was happy and fed and some Grand Rapids folks made a late afternoon arrival splash that added some energy to our group.

Saturday night brought another movie with Waldo Pepper making a showing. It was amazing to see so many pilots there that had not seen the movie due to its limited release. Our popcorn popper (purchased by the group for use at AirVenture) was a constant on movie nights and added to the effect.

We must be getting old as we were not able to pull off a third Grand Finale of the weekend. By the time the movie was over the guy in charge of the fireworks show was asleep in his tent. My lake neighbors were likely happy our late boom-boom show was canceled.

Sunday was bug out day for all. Wheel folks and float planes departed, but not before all threw in together to strike camp. Many hands makes easy work is more than a cliché and our fly in was taken apart in a matter of hours.

Rush hour on the ramp of Paul Jacksons Seaplane Base.

Fly by's and wing wags from wheeled planes and float planes alike seemed like appropriate good-byes to the group.

Just like that our seaplane base was home to only my amphib and the port-a-potty (they do not have Sunday pick-ups apparently).

There were several calls to make this an annual event. Many in our group said they enjoyed the small venue better than Oshkosh (I think it is the better smelling port-a-potty and lack of $6 ice cream cones).

While we long for normalcy, it seems like events like this break the routine we have had forced upon us by this pandemic and make the ordinary extraordinary.

Whatever it is, we can enjoy each other's company if we take some precautions and respect where we are today.

Here's to hosting a fly-in for 49 people!