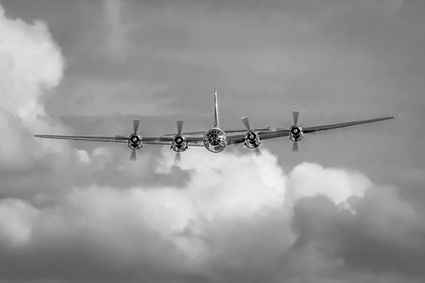 This collection of photo memories was submitted by aviation enthusiast and photographer, Greg Drawbaugh.

For myself as a non-pilot and non-aviator, taking images of the event is the main purpose of my visit each year. I especially like shooting during the flying demonstrations. For the past few years, I have made a connection with the ladies with the Warbird Living History Group, and I try to organize a photo shoot with these ladies and an owner of an aircraft. The shoot with the ladies always ends up being my highlight of the week at Oshkosh. 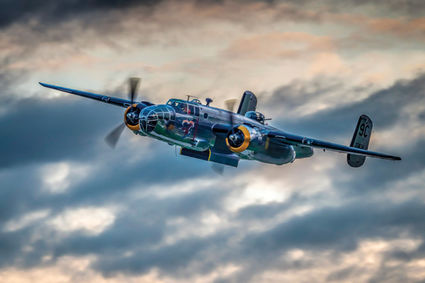 North American B-25D "Yankee Warrior" makes a nice pass during the Wednesday night airshow at Oshkosh 2017. "Yankee Warrior" is the sole flying D Model B-25 remaining and saw action in Italy in 1944.

If I had to pick a favorite part of the airshows it would have to be the warbirds. The head-on image of the B-29 Doc may be one of my all-time favorite Oshkosh images, and it was taken from the ground, honest. I also like to shoot when the light is not perfect, as the images can get a special look and I enjoy something different. The image of the B-25D Yankee Warrior is one such image.

An airshow would not be complete without some barn-storming demonstrations, and there are few as good as Kyle Franklin. The sheer power of his demonstrations flying his one-of-a-kind Dracula biplane are jaw-dropping, and this image captures him at the end of another great performance.

"Only in Oshkosh" is a tagline that applies to witnessing a Martin Mars making a water drop at show center. The year 2016 was extra special when Coulson Flying Tankers brought their Mars to Oshkosh and participated in the afternoon airshow.

Last, as a non-pilot, getting a ride for some air to air photography has long been a goal of mine. In 2018, my long-standing goal was achieved with an early morning ride in a Vultee BT-13. To me, this was my best Oshkosh adventure, so far...