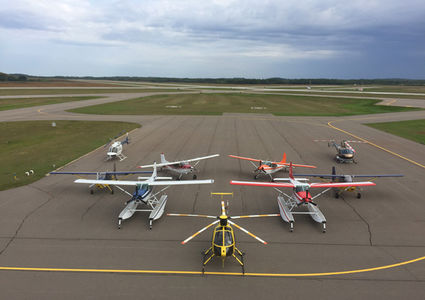 Photo courtesy of the Minnesota Department of Natural Resources

The three DNR helicopters and six out of their eight winged aircraft. Not shown are a Cessna 310 and a Quest Kodiak.

Appropriately the DNR has its own aviation group that operates eight fixed wing aircraft and three helicopters. Nine full time pilots and several part time ones fly these aircraft for natural resource management and enforcement missions.

Chief Pilot for the DNR is Captain Christopher Lofstuen. He describes the job as "challenging" and the pilots as the "most talented in the world." He also says managing them is like herding cats.

These people don't spend their time at 35,000 feet watching the autopilot and sipping coffee. An FAA waiver allows them to fly as low as 100 feet AGL. They do it even when the wind's blowing, and the turbulence means no beverages. Of necessity six of the fixed wing aircraft are "tail draggers." Two of them go on amphibious floats for the summer and all have skis in the winter. The two tricycle gear airplanes are used for spotting forest fires and their pilots' function as forward air controllers for the big tankers that put them out. DNR helicopters fight smaller fires using "Bambi" buckets, a fabric and aluminum water container suspended below the aircraft. Dip it in a lake to fill then drop the water on a nearby fire.

Radio signal homing in aircraft is used to locate animals as small as a Marten, sometimes even fish. Stocking remote lakes requires placing young fish in exactly the correct spot with careful handling on the way. Pilots need to understand biology, ecology, forestry, geology, and several other scientific disciplines to successfully do their jobs.

Wildlife surveys are also done visually, combining the skills of a pilot with those of a tracker. Waterfowl counts include nests as well as the actual birds, again requiring some tricky low-level work.

One helicopter is equipped for spraying to control unwanted and invasive species.

Although not part of their mandate, DNR pilots are often called upon to help with search and rescue work.

A lot of Minnesota is wilderness, and remote locations might tempt people to violate the laws. It is much easier to discover that kind of activity from the air. Getting enforcement people to a remote scene could be done with snowmobiles or boats, but catching bad guys is easier if you've got an aircraft. Making people who could have high powered firearms obey the law is a risky business. Some of the pilots are also licensed conservation officers and do double duty. They all have some background in natural resources.

Two of Captain Lofstuen's "cats" are good examples of pilots with "the right stuff."

John Heineman is a forester. He has a degree from the University of Minnesota and spent many years doing that kind of work for the DNR. At the same time, he served in the National Guard first as a helicopter crew chief, and later as a pilot. Along the way he acquired civilian fixed wing ratings up to CFI. In 1996 he joined the DNR's aviation group first as a "Forester/Pilot." He became a full-time pilot in 2002. John's based in Bemidji but flies the DNR aircraft all over the state. Heineman's known as a skilled and safety conscious pilot. His boss says, "we all strive to be like John." 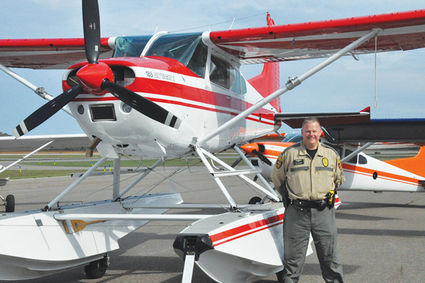 Photo courtesy of the Minnesota Department of Natural Resources

Captain Lofstuen and two of the Cessna 185's from the DNR Aviation Fleet.

In 1970 the US Army advertised "high school to flight school" and Brad Maas enlisted. He flew UH-1 "Hueys" for 5 years then came home to join the DNR Fisheries division for the next 31 years. At the same time, he flew attack and observation helicopters for the National Guard including deployments to the wars in the Middle East. At the turn of the century he started flying for the DNR and became a full-time pilot in 2014. Brad's based in Brainerd where he manages the helicopter fleet. He also flies the fixed wing aircraft and trains the department's other helicopter pilots.

Military flying experience is not a prerequisite for working in natural resources. Captain Lofstuen came to the DNR from the law enforcement community and part time work in General Aviation.

Minnesota is a great state, and one of the reasons is the citizens care about their natural resources.

Thankfully the government takes that mandate seriously, and the professionals that manage the great outdoors include a dedicated and talented group of aviators.