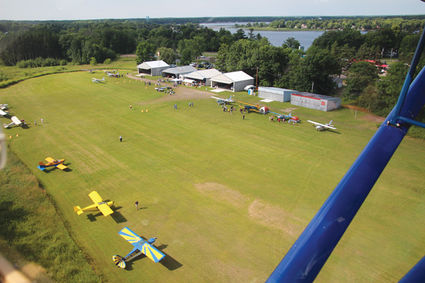 Preparing to land on the grass runway at Isle Airport.

Although there is still much work to be done and funds to be raised, the Isle City Council voted recently to keep the airport open.

At the June meeting of the Isle City Council a vote was taken which would determine the future of the Isle Airport.

In December of 2019 the city council and the Isle Airport Association received notice from the Minnesota Department of Transportation Office of Aeronautics that unless obstructions were removed the Isle Airport would be closed down. The obstructions MnDOT was referring to were tall trees toward the south end of the airport which were located on private property. An existing air easement was also discussed. The easement gave the city authority to cut the trees making it safer for pilots. There was also hope that once the trees were cut the Isle Airport could once again become a public airport.

There was some opposition from the city from an economic stand point. The city could see other possible uses for the land the airport sits on. Plans were made to take a vote at the April city council meeting to decide if the air easement would be enforced or not. Supporters were asked to write letters to the city as well as take part in an online survey.

Unfortunately, due to the COVID-19 pandemic, the April meeting was canceled.

The Isle Airport Association is happy to report that at the June 9, 2020 Isle City Council meeting members voted to enact the air easement, saving the Isle Airport.

The Isle Airport Association is made up of nearly 200 active members. The association will be doing fundraising to help cover the cost of tree removal.

For more information contact Dave Retka at 651-263-8614 or Daveretka@gmail.com