Back in the Family 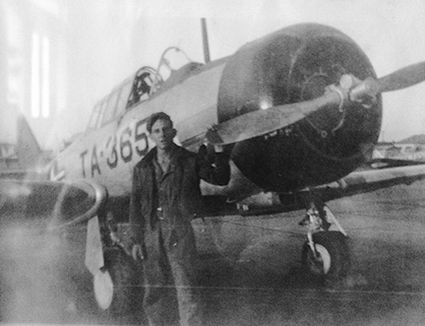 Every once in a while, you'll hear or read a story that just makes you feel good inside, or you might say to yourself, "That's a great story!" Chuck Datko's story of how he came to sell his T-6 Texan, and more importantly, who he sold it to, is one of those "feel good" stories.

Chuck Datko, age 75, from Coon Rapids, Minnesota, retired owner/president of Burmeister Electric Company, has owned a variety of airplanes over the years. His hanger at Anoka County Airport, in Blaine, Minnesota, has housed a Piper Cub, Piper Apache, Boeing Model 75 "Stearmen," Piper Cherokee and an L-29 Delfin Jet Trainer, just to name a few. But the aircraft that was most closely associated with him was his T-6 Texan, in which he has spent countless hours doing flyovers for many community events such as parades, car shows, funerals and sports events. During the summer months Chuck could be found at most airshows and fly-in's, which are annual events in Minnesota. He would proudly display his two-tone blue T-6 Texan on many airport ramps and taxiways, and patiently answer questions and pose for photographs with aviation enthusiasts of all ages.

In 1996 Chuck organized a group of other T-6 and SNJ (Navy version of the T-6) pilots in the area to fly formation at airshows and other aviation events, and "T-6 Thunder" was born. At first, the group of aircraft only appeared at regularly scheduled aviation events, but that was soon to change. Communities in the Twin Cities area started calling and requesting flyovers and static displays for many different occasions. What started out to be a group of pilots who just wanted to fly formation for the thrill of it a couple of times a month, turned into several "gigs" a week. During the summer of 2019, T-6 Thunder had 82 requests for appearances, either for a fly-over or a static display at an airport. Due to inclement weather 11 had to be canceled. Needless to say the aircraft did not sit idle for very long. After one of these appearances a photograph that was taken of Chucks T-6, ended up on the internet and caught the eye of pilot James Bohannon Jr., a gentleman living in Waller, Texas, just west of Houston. After a little research and finding out who was the owner of the aircraft, he called Chuck and asked if he would be interested in selling it. Chuck had been considering selling his airplane but wasn't quite ready to do so at the time and politely declined the offer. James then said something that changed the whole course of the conversation. James said, "My father used to fly that airplane in World War II." Chuck, being surprised by the statement, replied, "Are you sure it's the same aircraft?" James said, "Yes, and I have the pictures to prove it." It turns out James Bohannon Sr. had flown the T-6 for 75 hours as a cadet pilot at Randolph Airfield in Texas in 1945. James Sr. passed away several years ago and when James Jr. saw the aircraft on the internet, he just had to have it! How cool would it be to be able to fly the same airplane that your dad flew in WWII! Needless to say, the two pilots continued to talk for quite a while and the conversation ended with Chuck promising that if he ever decided to sell the T-6, James would be the first one he would call. Over the last four years James would call Chuck periodically and ask if he was ready to part with his beloved T-6 yet. After long periods of indecision and discussions with his wife Barb (who by the way didn't want him to sell the T-6), Chuck finally decided it was time.

So last fall on a cool October day, Chuck stood on the taxi way outside his hanger, and watched as "OL Blue" lifted off the runway and headed south for its new home. Chuck said, "It's been a good airplane and I feel very privileged to have owned it for all these years. I can't think of a better place for it to be going and I know the new owner will take very good care of it. James is also very pleased because now the aircraft is, "back in the family."

May 11-1951 shipped to Downy, California to the 3302nd Training Squad, Spence Air Force Base

November 1951, shipped to Bainbridge Air Force Base in Georgia 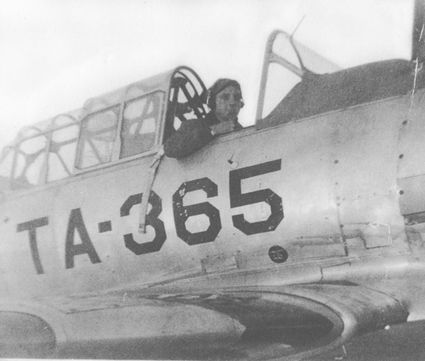 January 1958, Military Assistance Program (also known as the Land Lease Program) shipped along with 59 other T-6D's to Spain

1986 purchased by Don Keller, Chicago, Illinois (along with 9 other T-6D's from Spain)